Major US stock indices are stuck at the top, settling the 4th trading session near the historical highs on S&P 500 and Dow Jones. Nasdaq keeps positive dynamics, but intraday growth has become much more cautious, as it often happens near the tops. Chinese indices feel much worse. The country’s key indices were hit by the news of growing unrest in Hong Kong. Hang Seng has lost 4% this week. Shanghai’s China A50 decreased by 2%, but feels worse than the most other markets. 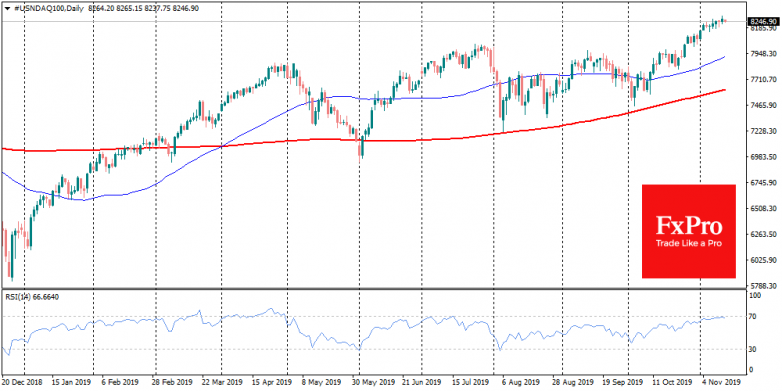 Similar hope cooling is observed in the currency markets, where the Chinese yuan is retreating after a brief growth under 7.0 per dollar. Risk-sensitive currencies (JPY, CHF) also noted a more cautious approach of the markets. Equity markets are balancing at the top, from where they may drop with the monetary authorities’ less dovish tone, as well as the frustration surrounding the progress in trade negotiations.

U.S. President Trump is back on track, threatening to raise duties if there is no Phase 1 deal. It is quite possible that the demonstration of progress in the negotiations affected not only market expectations, but also the central banks’ policy. 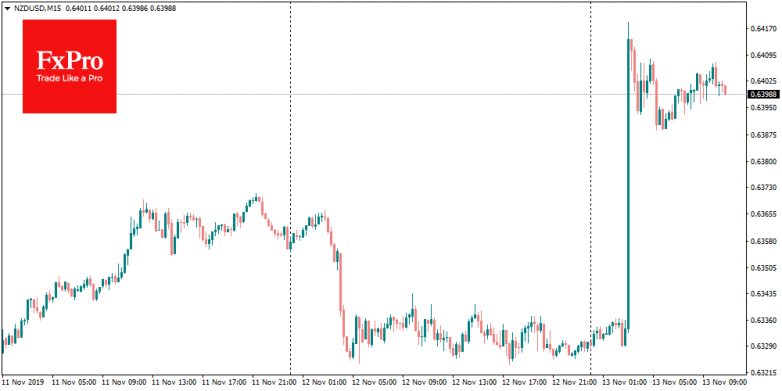 For example, the Reserve Bank of New Zealand kept the rate unchanged, contrary to broad market expectations. Kiwi takes flight after this news. NZDUSD jumped 1.3% to above 0.6400 in less than a minute this morning. The RBNZ noted that they do not see a rush to soften the policy. Before that, the Federal Reserve Board made it clear that they intend to pause the rate cuts.

If this is a new trend, the world markets may lose their primary driver of growth in recent weeks. The dangerous decrease in the market volatility double the markets caution on prospects, assuming the possibility of both a soft landing and a very rapid drop if the news on world trade won’t be able to maintain a positive mood.