Bitcoin continues to lose ground it managed to gain due to “Chinese FOMO”. At the moment, the benchmark cryptocurrency is losing 4% and trading around $8,100. This level is serious support for the benchmark cryptocurrency. The round level at $8,000 is an important psychological support factor. We saw a strengthening of buys as Bitcoin approached this mark by the end of the Monday. However, Bitcoin’s position has been worsening since this morning. Almost immediately below this mark – around $7,900 – there is a 200-day simple moving average. This is a fundamental signal level, which has stopped the sell-offs several times before. The last time we saw this was in October, and in April, when Bitcoin started its rally from 5K to 14K after almost a month of a sideways trend. 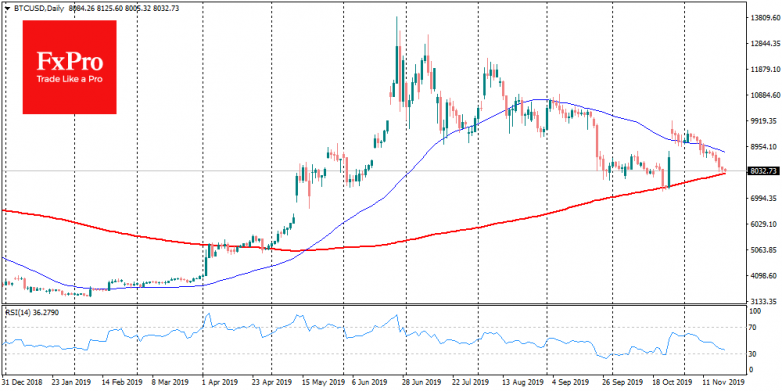 So, if Bitcoin can’t withstand bear pressure at $8K, we can expect a very sharp dive with the nearest important stop at $5,000. A sharp decline of Bitcoin couldn’t but pull the rest of the crypto market. Over the last day, the total capitalisation slipped by $9bn. Bitcoin Cash (BCH) became the record-breaker on the decline, losing 7.5% on the previous day. Other altcoins from TOP-10 lose less. However, all are confidently in a red zone. Waves of “desperate sell-offs” of altcoins (when the investor fixes huge losses) will intensify with the further drawdown of alternative cryptocurrencies, as the current price levels for many coins are significantly lower than any psychological levels.

Some well-known analysts predict the growth of the benchmark cryptocurrency up to $25K, but we are talking about 2022, so such forecasts do not cause any excitement. What if the summer growth to $14K was a rally in the bear market? There are suggestions that the “pump” may be associated with the rise of positions before halving, and if it is true, then in the medium term BTC may be caught in a “depressive sideways trend”. We are talking about successive sideways trends when almost each of them ends with a decline.

From the beginning of 2020, investors will be waiting for growth based on halving, which will support the price of Bitcoin, but if, as the event approaches, everyone begins to realise that “the best is in the past”, it may lead to a new large-scale sale. This would be the worst medium-term forecast for Bitcoin, but this scenario cannot be ruled out. 2019 gave the market new hope, but judging by the fact that Litecoin was bought long before halving, and initiated a sale a few months before halving, in the case of Bitcoin, this period could be much more significant.