Bitcoin’s sideways price trend has been going on for over a month. With highs around $7800 and lows bear $6600, most of the time the Bitcoin price was close to $7200. Technical analysts believe that now there are prerequisites for growth in the market, citing the growth of long positions at Bitfinex, which exceeded 47.5K. However, fans of graphic analysis mostly see bearish signs, citing the “death cross” (fall of 50-day average under 200-day one). The latter concerns short-term prospects, which are supplemented by another observation: without the growth impulse, the pressure increases. 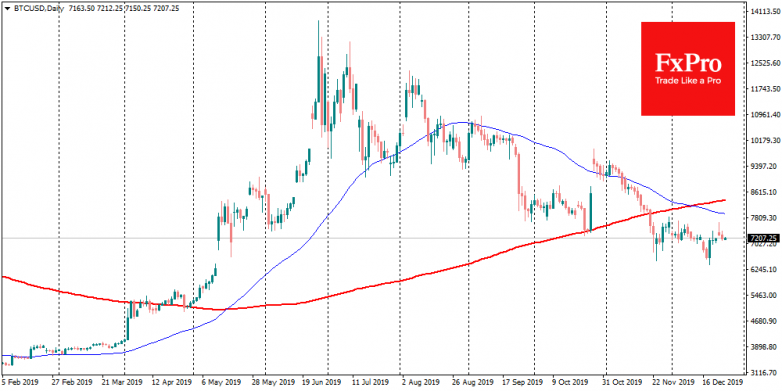 However, it is impossible not to notice a particular market expansion. Current trading volumes (around $22 bln a day) are 58% higher than at the price peak. We can see that the trading volumes did not allow the crypto market to rise in price. The level of excitement and belief in the “crypto project” in 2017 was so overwhelming that few people expected that there would be anyone willing to short it. There were market professionals who used futures for this.

At the moment the mood has become noticeably more down-to-earth, but well known in the crypto world experts are finding new reasons for possible growth. Thus, Spencer Bogart, a partner at Blockchain Capital, believes that in the future, we will see a logical shift of attention of investors and developers back to the first cryptocurrencies, including Bitcoin and Ethereum. The hype around digital currencies has generated many projects that tried to become “Bitcoin killers”, but in fact, it has led to a blurring of the market, the size of which confuses investors.

Nevertheless, logic always wins, and most altcoins are in danger of imminent oblivion. Participants in the crypto market realized that everything started with an open, free and unbound blockchain, and it was this idea that made the crypto market innovative. The emergence of a massive number of companies and participants who had to obtain regulatory approvals distorted the view, but the situation will likely to change.