Cryptocurrency did not create investors a festive mood at the end of the year, but with the beginning of the new year, some of them had an opportunity to sell bitcoins at a higher price. Geopolitics and false signals as a sharp increase in USDT issue by $500 mln created a basis for growth for the bitcoin, and then for the whole crypto market. A sharp rise in the USDT emission perceived as a positive signal for growth, so bots start buying after such news. What happened once again indicates a growing share of algorithmic trading in the crypto sector. 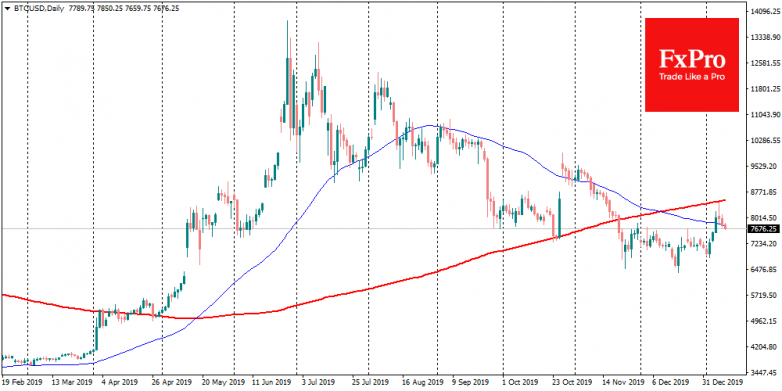 As a result, Bitcoin jumped up to $8,400, where it faced severe resistance. Apart from mistaken news on USDT emission, the geopolitical tension around Iran and the U.S. began to decrease. It became clear that both sides are not interested in further escalation and markets started to return to normal functioning. For Bitcoin, this means a decline.

Besides, as the crypto market began to grow, the technical picture pointed to a significant overbought of the Bitcoin. The Relative Strength Index (RSI) was even higher than when the bitcoin rebounded to $10K at the end of October 2019, when China’s head Xi Jinping made his famous statement related to China’s course on the blockchain development. It is not surprising that now we are witnessing a rollback in prices. However, the cautious nature of the reversal suggests that the level of optimism is still quite high.

Several well-known traders, including Peter Brandt, still hold bullish views on bitcoin. One of the leaders in the analysis has tweeted several bullish scenarios for bitcoin in 2020. In the first scenario, we will first face bear pressure which will push the Bitcoin down to $5K and then see the rebound while the lower boundary is held. In the second scenario, we are already out of the descending channel, which lasts from the summer, and the long accumulation of the asset will be the main reason for its growth. Also, optimists are waiting for Starbucks and Bakkt to collaborate, and for bitcoin usage to increase in the real world.