Bitcoin: not gold yet, but glitters now

Bitcoin decided to make its holders happy at the beginning of the new work week. The benchmark cryptocurrency adds more than 2% and changes hands for $8,600. Thus, we see that Bitcoin still attracts support in the $8,300 area, while the correction rollback after the new year rally did not develop into a full-scale drop. Altcoins supported the strengthening of the first cryptocurrency and are in the green zone. All bitcoin forks, including Bitcoin Cash ( 15%), Bitcoin SV ( 8%), Bitcoin Gold ( 14%) and Bitcoin Diamond ( 11%) showed impressive growth on Monday morning.

There are growing assumptions in the crypto community that the new growth momentum linked to the China virus spreading. The conclusions щare drawn by analogy with geopolitics and the threat of a new world war after the sharp increase in tension between the U.S. and Iran earlier this year.

Given that Bitcoin is often referred to as protective assets like gold in the crypto community, a shift from war threats to fears of an epidemic may play a role. Still, more often than not, positive or negative dynamics are now linked to more obvious reasons, such as increased trading volumes in futures and the triggering of trading bot orders.

On the one hand, the Chinese virus does hurt the traditional market for obvious reasons. For example, oil is declining due to the prospect of lower demand. Stock indices react to worsening sentiment and chances of supply chain disruptions, possible bankruptcies.

On the other hand, the positive impact of the epidemic on the Bitcoin can be questioned, as so far, the scale does not allow to assume panic demand for an alternative possibility to move capital. 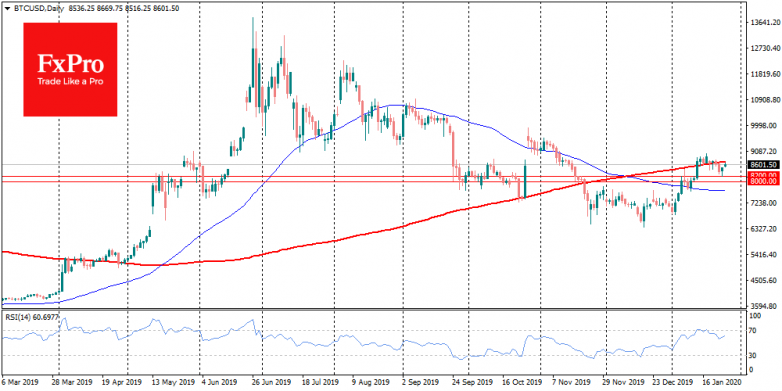 This option is possible if the epidemic turns into a national catastrophe with the prospect of disabling mining farms, disruptions in the supply of mining equipment, restrictions on capital flows from the country and other dire consequences. It is possible to assume a decline in Chinese demand for Bitcoin due to the long holidays until February 2.

Most likely, investors who own stocks and other risky assets, which are now declining, also own bitcoin. Some diversification has affected the cryptocurrencies, but it is more likely a rebound from support levels and routine (adjusted for increased crypto volatility) fluctuations in prices due to bots reacting to technical indicators.

The current reaction of the crypto market doesn’t look like panic buying. At the end of last week, there was a market decline. We all remember how massive the growth was in response to Xi Jinping’s statements about the country’s course to the blockchain. Thus, it will be possible to link the epidemic, and the Bitcoin dynamics in case of volatility spike and double digits percentage markets moves.