Without massive OPEC cuts, Brent may drop to $40 area

Brent rebounded from 2.5-year lows earlier this week, stabilizing around $52.0 in anticipation of OPEC oil ministers’ decision. However, this may not be the end of the show, as there will be an extended OPEC meeting on Friday, which includes Russia. The latest comments of the Russian Energy Minister make us look into the future with caution. Despite the declaration of openness to all options, he still does not show support for sharp cuts in production.

This approach causes traders to wait for resolution of the situation. On the one hand, Russia and Saudi Arabia have helped stabilize oil prices in previous years by limiting their production and influencing neighbouring smaller countries. 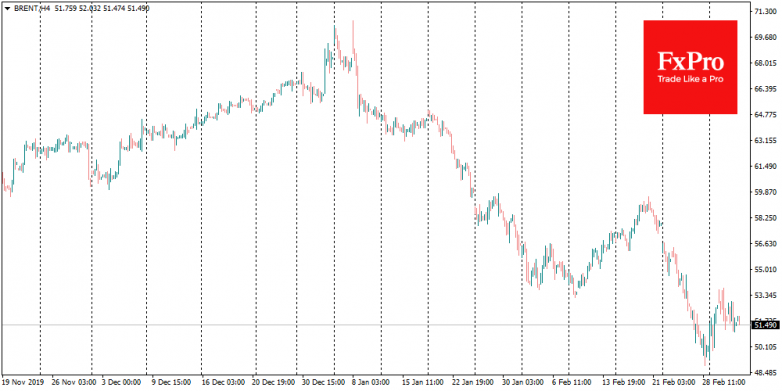 On the other hand, it was precisely due to these restrictions that the U.S. managed to increase its production and become a market leader. Now their representatives with great success are increasing oil exports from the United States to the markets traditionally controlled by the former market leaders. It is hard to believe that Russia is ready to continue witnessing such market redistribution.

Besides, it is worth paying attention to the stabilization of the markets. Rates cut from the Federal Reserve and similar steps from the Bank of Canada, Hong Kong, and others, as well as promised measures to stimulate the economy, can become a harbinger of rising prices for raw materials assets.

Russia has previously noted that it prefers to take a “wait-and-see position”, having refused the emergency OPEC meeting in February. The country may continue to hold such a position.

The OPEC technical committee recommends production cut by 1.1 mln. Barrels per day in the second quarter. With these negotiations stuck and adverse comments coming from the cartel and Russian energy ministers, the 500-600k cut scenario looks more neutral for the market.

While Russia and Saudi Arabia benefit from higher oil prices, they can still take a strategic step by refusing to make emergency cuts now but promising them later if necessary. 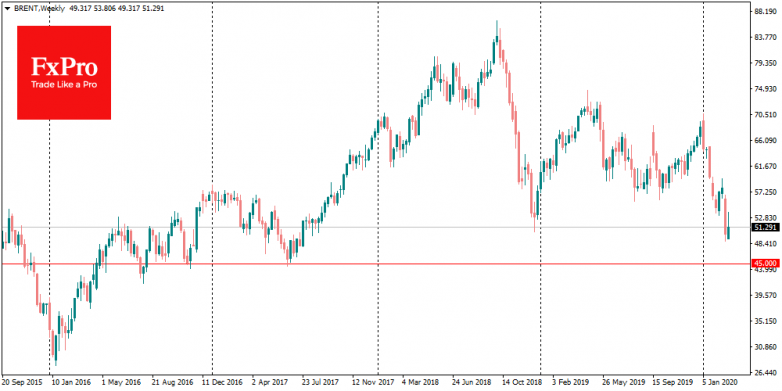 If OPEC launches a rally in the oil market through active production cuts, it will only fill the wallets of U.S. producers and potentially create even stricter competition for traditional markets.

In our view, while markets are waiting for an oil rally in response to stricter restrictions from the cartel, we cannot refuse the scenario of late 2014, when Saudi Arabia pursued a self-balancing approach to the market, intervening only in early 2016 when prices collapsed below $30.

It may be quite reasonable for Russia and Saudi Arabia not to intervene as long as prices are above $40, i.e. below the break-even point for most U.S. oil shale producers.