The crypto-miracle didn’t happen as assets drop together

The Bitcoin’s attempts to reverse the trend encountered resistance near $6,800. As a result, at the beginning of the working week first cryptocurrency loses more than 7% and changes hands around $5,800. A decrease below the round level at $6,000 provoked increased sales. Altcoins follow the benchmark coin and are declining on a similar scale.

The Crypto Fear & Greed Index is a very accurate reflection of what is happening in the crypto market, remaining in the “extreme fear” area. This index did not go up even at the moment of the market bounce attempt. The RSI index showed growth along with the price; however, it barely bounced back from the oversold area. 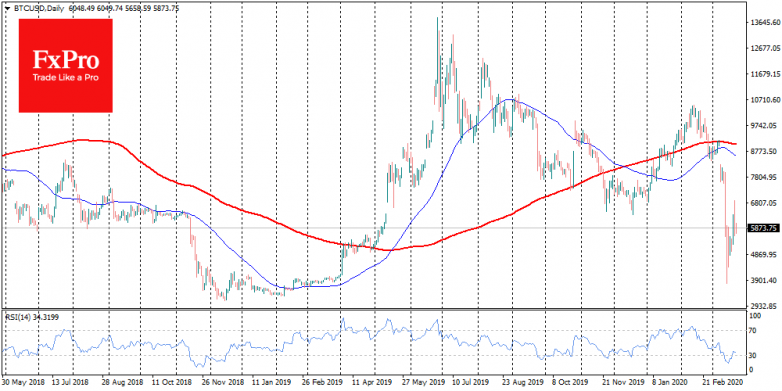 Why is this happening? Bitcoin was sold out when overall market fears peaked. But after a crushing decline, Bitcoin was expected to be counterbalance to what is happening in traditional markets. And now we are witnessing stocks and oil falling again, followed by Bitcoin.

A crypto-miracle did not happen. Investors have an extreme level of fear about all assets at once, while triggering margin calls in the financial industry is forcing institutional investors to exit with cash without looking at prices. 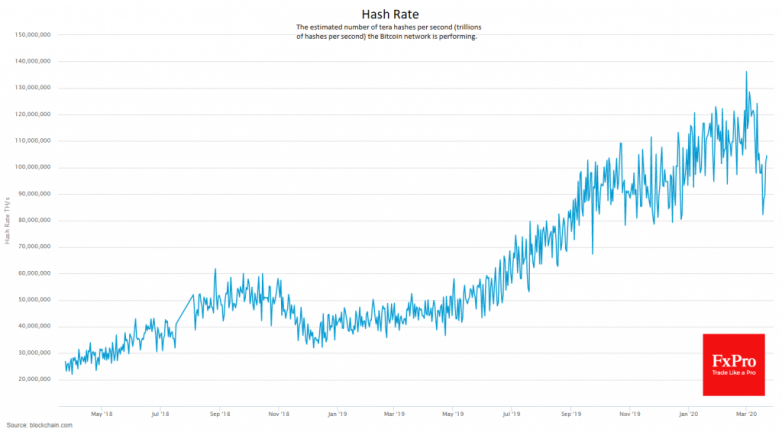 Finally, with the bitcoin price falling in March, there was a reversal in the hash rate. The miners were massively shutting down their ASICs, with the price falling below $7,500. Now when the price is close to the levels of May 2019, the hash rate has increased again. Massive shutting down occurred against the backdrop of a twofold drop in the price in less than a month. The last time such moves in price and complexity of mining we observed at the end of 2018. A sharp collapse was then followed by three months at the bottom of both the hash rate and the price.

Nevertheless, the speculative interest did not go anywhere. Demand can lead to a sharp increase and decrease in the price, but the real driving force can only be retail demand and use in payments around the world. The planet is well on its way to self-isolation, but the need for exchange between countries won’t disappear, which can be considered positive for the crypto market.