Another sideways trend for Bitcoin ended with a sale. At some point, Bitcoin was falling below $6K, and only a decline below that round level attracted buyers. At the beginning of the new working week, Bitcoin adds more than 2% and trades around $6,300, and the overall mood is improving somewhat.

The Crypto Fear & Greed Index is still in the “extreme fear” area, having lost several points recently. According to the idea of the creators, now it is a great time to buy, but investors are clearly in no hurry to take this opportunity. The RSI index is in the neutral zone, without any signs of choosing a particular direction. 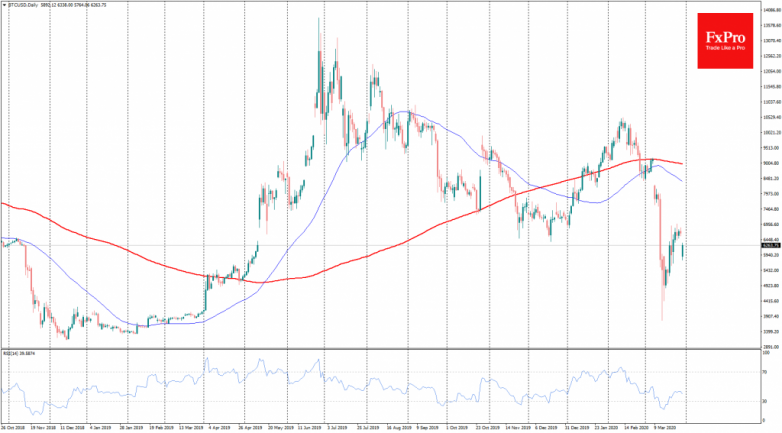 Altcoins fully duplicate the dynamics of the leading cryptocurrency, showing a moderately positive mood. Alternative coins are now close to the levels (or lower) preceding the 2020 rally. This should be another argument for bulls, but so far, other factors have not formed in favour of the crypto market.

Central banks are trying to contain a “virus fire” in the global economy. Still, the process is complicated and lengthy, with many adverse effects just beginning to appear. Retail investors are preparing to tighten their belts for weeks or even months to come. New money supply from the Fed and Co. (other global central banks) is still infinitely far from the real sector, helping at this stage only to stabilize the quotes of some financial assets, but not retail. Whether institutional investors are using the current moment to buy is also a big question, as optimists already have a lot of options, while pessimists are preparing for the bottom ahead.

Against the background of a non-stop “printing press” from the world’s leading central banks on the one hand, and the limited issue of Bitcoin, on the other hand, restoring interest in the crypto market seems like a logical scenario. However, as long as the essence of Bitcoin’s existence lies in sharp price swings and is not based on any long-term idea for investors, its prospects are even vaguer than the future of traditional national currencies.