With increased volumes, is crypto ready for growth?

Bitcoin climbed by 5% in the last 24 hours and is trading at around $6,650. Yesterday, the benchmark coin was clinging to $6,200, but it started to grow sharply late at night. As for technical analysis, this price jump closed the gap formed at the opening of the trading week. After that, the interest of buyers decreased.

Altcoins are showing full compliance with the bitcoin price dynamics. The top 10 altcoins are growing by 3-4%. Another argument in favour of the reversal may be the pressure on the Tether (USDT) stablecoin, which often sags slightly at moments of growth of other cryptocurrencies. According to CoinMarketCap, the daily trading volume of the crypto market has grown by 23% to $130bn. The total capitalization increased by almost 4% to $186bn in 24 hours. The Crypto Fear & Greed Index has grown by several points per day, being in the area of “extreme fear”. RSI is in a neutral zone waiting for new triggers.

According to WhaleAlert, an unknown whale moved 101,857 BTC (USD 633,535,530) yesterday. These bitcoins were transferred between two anonymous wallets. The wallet with a single deposit immediately took third place in the TOP 100. It is challenging to link this transaction to the growth of the bitcoin explicitly, but such large transfers are rare and can definitely “shake up” the crypto community.

Recently, digital currencies have demonstrated a correlation with traditional risk assets, so if the market trend reverses, an improvement can be expected in the crypto sector as well. 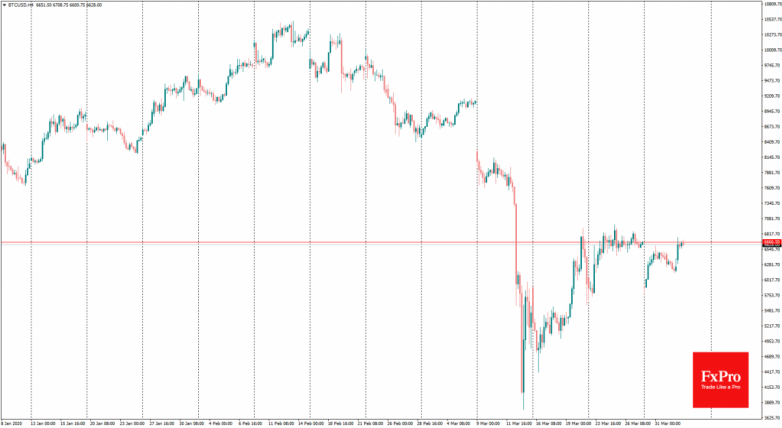 Traders at Coinbase have prepared for the market rebound in advance. Coinbase data showed a significant increase in trading activity and demand for the purchase of leading digital currencies immediately after the collapse of the crypto market on March 12. Traders bought the dips, which allowed the market to bounce back quickly, but a full-scale reversal required much larger volumes.

If we take a longer-term perspective, the options market shows a negligible 4% probability of Bitcoin price growth to $20K. The market’s pricing only 16% likelihood for the move above $10K, although it was there as recently as six weeks ago. Monetary easing announced by central banks are not able to revive demand for cryptocurrencies, but institutional investors’ optimism may well push the digital coins up.