The crypto market followed the stock market up

Bitcoin and the overall crypto market started the week on a positive note. In the last 24 hours, the benchmark cryptocurrency has added almost 4% and managed to exceed $7K. Along with the price, the growth of trading volumes is also noticeable, which further strengthens the upward momentum for the coin. The bitcoin dominance index remained close to 65% during the week. The RSI shows growth along with the price, but it is still in a neutral area from which it can quickly turn down. Since mid-March, the Bitcoin Crypto Fear & Greed Index remained in the “extreme fear” area.

If you take weekly values, then the picture is even more optimistic. Bitcoin climbed by more than 12% in the last seven days. 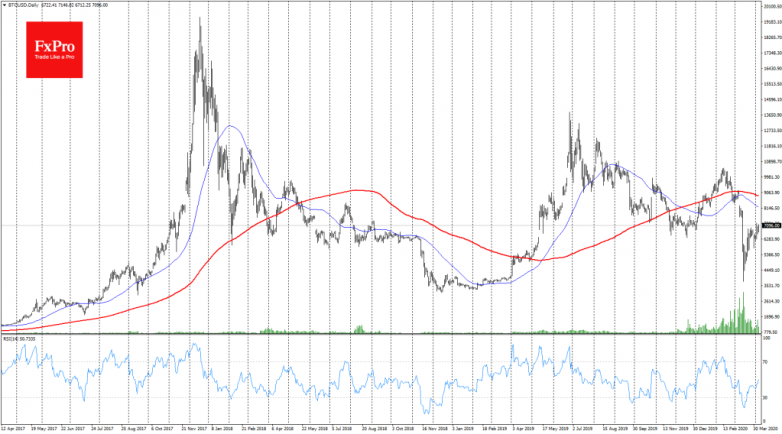 Probably, the purchases follow the signs of improving sentiment in the stock markets. As soon as risk assets start to attract demand actively, institutional investors may also increase their positions in the cryptocurrency.

Economic stimulus policies are undermining the value of national currencies. Besides, the planet is facing an entirely new reality, where everything with the “digital” prefix now has an additional chance for growth After the Spanish flu, the world had higher levels of the hygiene. The result of coronavirus may be the growth of human life digitalization, as well as integration in new areas of those people who did not think about the imminent moral obsolescence of his profession.