BTC continues its fight for price and place under the sun

Bitcoin retains its superior feature – volatility. After a decline to $6,500 earlier today, bitcoin showed a sharp rebound to levels above $7,100. Strengthening of the first cryptocurrency is accompanied by increased trading volumes, confirming the strength of the positive dynamics. The altcoins at first repeated the decline after the bitcoin, now they have switched to growth. Ethereum (ETH) and EOS show the most optimistic picture with an increase of 6% and 7% respectively. The total capitalization of the crypto market has also fluctuated sharply over the last 24 hours, stabilizing near $200bn.

The Crypto Fear & Greed Index saw a deeper dive into the area of “extreme fear” on the back of increased market volatility. If we rely on the index data, now is the best investment opportunity. However, sharp price swings suggest that investors prefer short-term positioning. The decline to $6,600 was immediately repurchased, bringing prices back to the levels at the start of the week.

The short-term round level of $7,000 attracts traders’ attention. The mid-term technical picture is more tilted in favour of bears. On the daily charts, BTCUSD remains markedly below the 50 and 200-day averages (a sign of a downward trend), with the RSI out of the oversold zone, giving no buy signals.

While the participants of the crypto market are trying to assess the degree of the possible impact of halving on the bitcoin prospects, the creator of Silk Road Ross Ulbricht, currently serving several life sentences, continues to forecast bitcoin. Ulbricht is very optimistic about the prospects of the crypto market, expecting that the highs of December 2017 in the future will look like “low hills”. However, even he does not rule out a downfall to $3K before this. 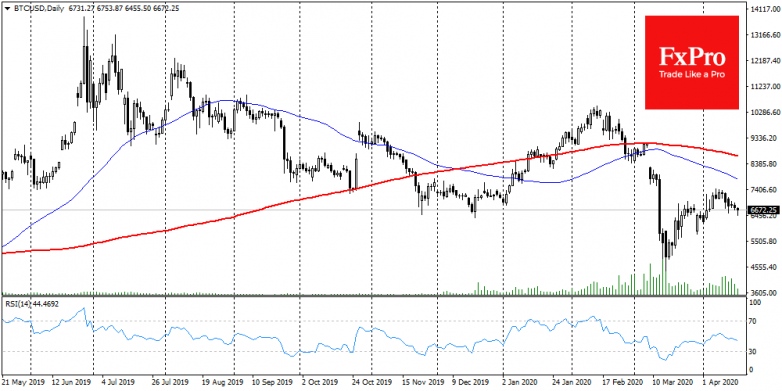 Investors need an extraordinary firmness to enter the market at this price level, given the news of Chinese digital yuan testing. Of course, all this news is far from official releases. However, everybody understands that the planet is rapidly moving towards “digital”, and the appearance of such currency is a logical step.

While Western economies are struggling with the virus and 5G tower arsonists, China is using this leeway to gain a leading position in the digital economic field. The paper yuan won’t be able to compete with the dollar or the euro. Still, in the new digital world, which will become particularly relevant after the end of the epidemic, it will rightfully take its place.

So what will happen to Bitcoin, Ethereum, Litecoin, and other major digital coins after the launch of national digital currencies? The optimistic scenario suggests that all these projects will find their place in the new world. After all, we have a lot of currencies in developed and emerging economies. The main feature of the digital global economy will be de-anonymization. Therefore, at least partial anonymity of digital currencies that are not tied to central banks will be valued at a new level.