Bitcoin in the coronavirus crisis

Bitcoin has fared better than stocks but worse than gold and U.S. Treasuries during the coronavirus pandemic, with investors ascribing its performance to speculative bets and bids to hedge against inflation linked to stimulus measures.

Enthusiasts have laid out numerous narratives for bitcoin as an investment proposition through its first 12 years – from a rebel technology set to upend the financial system to a groundbreaking payments network; from an uncorrelated asset to a hedge against inflation-inducing government policies. 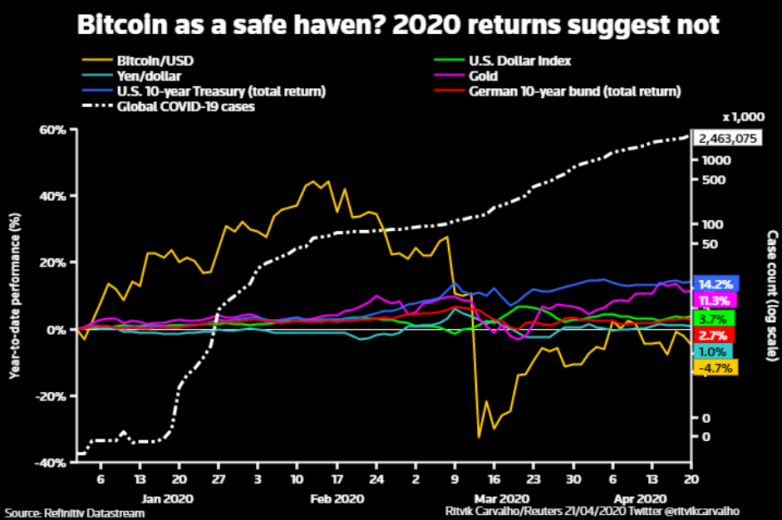 Bitcoin has this year done better than both U.S. and world stocks, posting a loss of around 5% compared to respective drops of 13% and 16% for the S&P 500 and MSCI All-Country World Index. Like equities and other riskier assets, bitcoin surged in the wake of unprecedented stimulus packages launched by governments and central banks in mid-March to mitigate the economic damage caused by the coronavirus.

The cryptocurrency has soared 80% since mid-March, partly because it offers the chance of quick returns as the stimulus measures wash into markets, investors and traders said. Bitcoin and cryptocurrencies have appealed to investors as “they can offer a potentially higher risk-reward scenario that they cannot find in other assets”, said Michael Sonnenshein, managing director of Grayscale, the world’s biggest cryptocurrency asset manager.

Enthusiasts say bitcoin is immune to the impact of geopolitical tensions or government policy because of its decentralised nature. Unlike central bank-issued money, miners competing to solve computer puzzles produce bitcoin. With a supply capped at 21 million, the argument goes, its scarcity gives it an innate value and shields it from central banks moves or policies that stoke inflation.

But in 2020, bitcoin fared worse than traditional safe havens like gold, up 11%, and U.S. 10-year Treasuries, gains on which have climbed 14%. On March 12, when bitcoin crashed 40% to its worst single day since 2013, other so-called safe havens proved far more resilient. Bitcoin’s gains, some investors say, were driven in part by bets it can hedge any future inflation caused by government stimulus measures.

Bitcoin’s notorious volatility has hobbled its use as a means of payment and scared off large, long-term investors such as pension funds – but attracted hedge funds and high-frequency traders, who make money on short-term price moves.

As bitcoin volatility jumped, major cryptocurrency exchanges saw huge spikes in volume in mid-March. Many investors sold off bitcoin – like other assets – to raise cash for margin calls, analysts said.

Daily volumes at the world’s top exchanges jumped to $21.6 billion on March 13, their highest in seven months and among the highest on record, research firm CryptoCompare said. Trading of crypto derivatives such as bitcoin futures – often favoured by high-frequency traders – also climbed in March to its highest on record.