Bitcoin grows, knocking down obstacles one by one

Coronavirus has receded a little, clearing the room for other news events, among which is halving in the Bitcoin network. There are only 12 days left until the world’s most important crypto event. Halving-FOMO finally got the space to amplify its strength, and the digital currency market showed a rather impressive rally. The whole crypto market was comfortably in the green zone.

In the last 24 hours, the bitcoin grew by 16% or $1,300 and is trading around $9,200. The capitalization of the first cryptocurrency has increased by 16% or $24 billion with almost doubles the trade volumes over the last 24 hours. According to CoinMarketCap, this indicator reached a historical high at $71 billion compared to $20 billion on the price peak in 2017. In terms of investment opportunities, the market has grown dramatically. 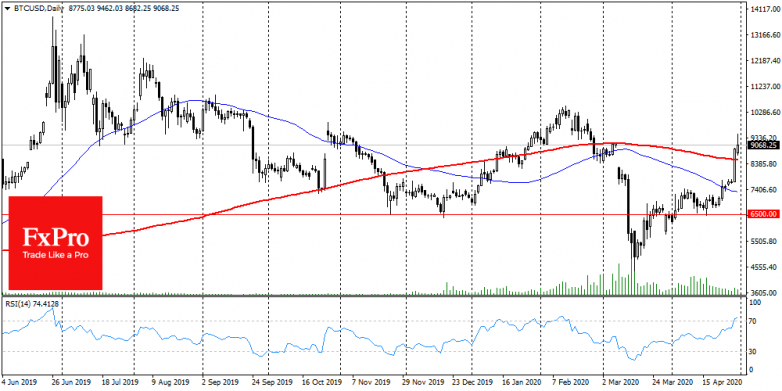 Technical analysis is also on the bull’s side. From this point of view, the growth accelerated after reaching a level above the 50-day average. And the day before, the price crossed the 200-day average and fixed above it on Wednesday. The bulls may further target the February highs area at $10,400.

In a week, the first cryptocurrency shows a 30% growth. Ethereum (ETH), XRP, Bitcoin Cash (BCH) and Litecoin (LTC) rose by 21%, 22%, 16% and 19% in 7 days, respectively. Altcoins always follow the first coin, but this time it is worth noting XRP, which began to grow before the Bitcoin rally. The cryptocurrency has been under severe pressure over the last few years and started to get a boost from buyers because of its deficient historical price level. Although this does not mean that XRP won’t face increased pressure from short-term speculators, as the fundamental basis for growth remains weak. 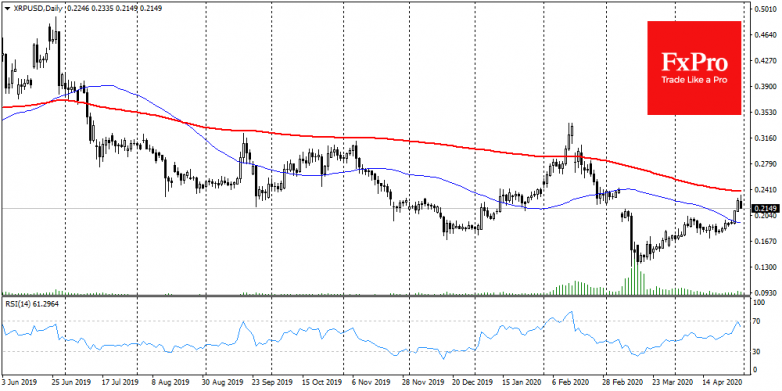 The approaching halving is mainly causing positive vibrations in the crypto market, but as always, there are supporters and opponents. During the last 24 hours, we have seen the support of the buyers. However, some believe that halving is already in the price. From this point of view, halving is a reason for current buyers to take profit from the rally. At the moment, the cryptocurrency may face selling pressure from short-term speculators who bought it in March after the market crash, as well as from miners to cover operational risks.