Bitcoin is at risk of deep fall in the coming months

The sideways price trend is bad luck for Bitcoin. In recent years, the tug of war games between bears and bulls almost invariably ended with a decrease of the first cryptocurrency. In the last 24 hours, bitcoin has lost nearly 4% to $8,700. Ethereum (ETH) sank under $200 threshold, losing more than 6% in the last 24 hours.

The Crypto Fear & Greed Index rose 17 points over the week, fully reflecting the market sentiment. However, it remains in the “fear” area. The RSI for BTCUSD on the daily chart is declining from the overbought area. This technical indicator has worked accurately enough lately. 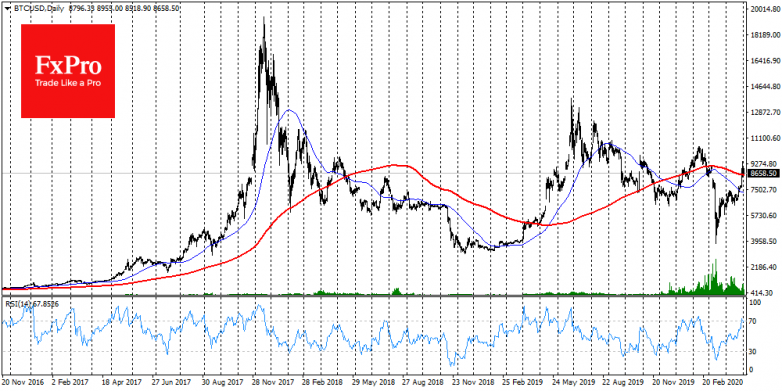 Since last Thursday Bitcoin is being redeemed on the declines to the 200-day average, which has stabilized near $8,500. If this support could not resist, the pressure on the first cryptocurrency might intensify. A simple 200-day moving average is a reliable trend indicator in traditional markets, and it has proved to be a reliable indicator on the crypto market.

The decline under this line at the end of February was the start of a 3-fold price collapse the following month. In November 2019, BTCUSD dropped by 18% the next month after fixing under the 200-day line. In May 2018, the decline from about the same levels was stopped only seven months later, at $3,300. 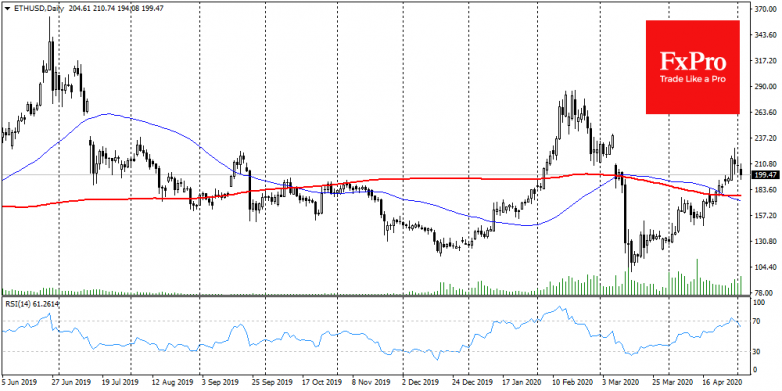 There is only a week left before halving in the Bitcoin network, but it is still difficult to see signs of FOMO in the market dynamics, which could push the price far above $10,000. And the closer the halving is, the less likely FOMO to happen.
It is quite probable that halving will not clear on price prospects for market participants. As before, this event may have a delayed effect. However, the environment around the cryptocurrency and the composition of investors has changed. Institutional market participants still are not crypto enthusiasts. This should be considered in forecasts on the impact of halving on the future price of bitcoin.