Bitcoin to rally after halving?

Bitcoin is growing against the entire crypto market, adding 3% in the last 24 hours. The first cryptocurrency is not only above $9K but is close to reaching $10K. However, if you ask the crypto market participants if this is the scenario they expected as halving approaches, the majority will say they expected more. Of course, with less than 5 days left before halving, a lot can happen around the crypto sphere, but on the fundamental level, everyone understands that if the recent growth of the bitcoin is the optimism maximum, then digital currencies are not doing well at the moment. However, it is unlikely that it will be that bad for the first cryptocurrency, even if the price starts to decline significantly after halving, and even if it does not recover for a long time. 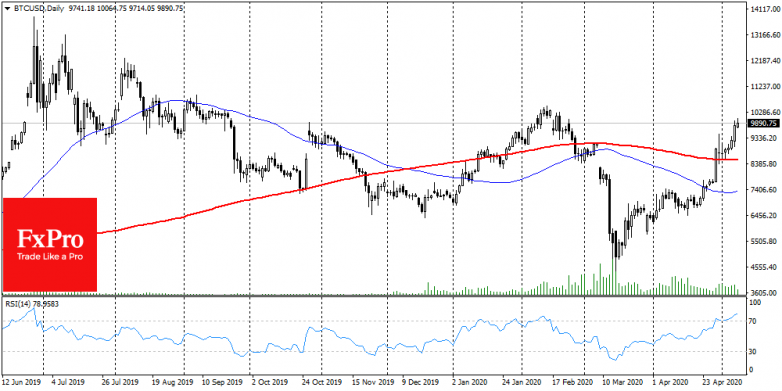 The last two times, halving ended with growth due to the unshakable faith of the crypto market participants in the Great Bitcoin Mission as a project that opposes the entire traditional financial system. When faith became too strong, institutional investors were allowed to enter the market. Crypto-enthusiasts were waiting for a new impetus from institutional money. But futures became the starting point of crypto winter, hitting the hopes of retail investors in the crypto. Why did the popularization of Bitcoin in the financial world lead to a drop in price?

It was a sharp growth in the price of Bitcoin that led to the coin being perceived as a danger that needs to be contained. A growth above $10,000 and the scale of the crypto fever made Bitcoin “visible” to regulators.

The basic essence of the Bitcoin is its survival mechanism: the increasing difficulty of mining, decreasing profitability, and limited emission. By the way, a similar combination could also help the entire global economy. Previously, this combination led to an increase in the price of an asset. However, now we can see that the growth of bitcoin is facing with quite serious difficulties. Why? The market composition has changed and the trading volume has grown significantly.

What is the actual (not theoretical) price growth limit for Bitcoin? Not $100K and not even $50K or $25K. It is likely that the basic principles of survival will change with the new conditions: the growth of trading volumes limits price growth, shifting Bitcoin from the category of speculation around the price to the investment of the financial system of the future. Since the beginning of the year, trading volumes in the Bitcoin network have increased by 140% and are well above the 2017 levels. It is likely that Satoshi realized that an asset cannot develop with a non-stop price growth.

True crypto-enthusiasts should not be afraid of a decline in the price of bitcoin. Rising mining difficulty, lower premiums, stabilized prices, higher trading volumes, and a loss of regulatory interest – this formula may well work to turn a bitcoin into a real superstructure over a financial system despite current or the future price slumps.