China Purchases of US Goods Fall Short of ‘Phase 1’ Accord

The coronavirus pandemic will cause China’s purchases of U.S. goods this year to fall way short of what was agreed to in the “phase one” trade deal, according to a forecast by think tank Center for Strategic and International Studies. 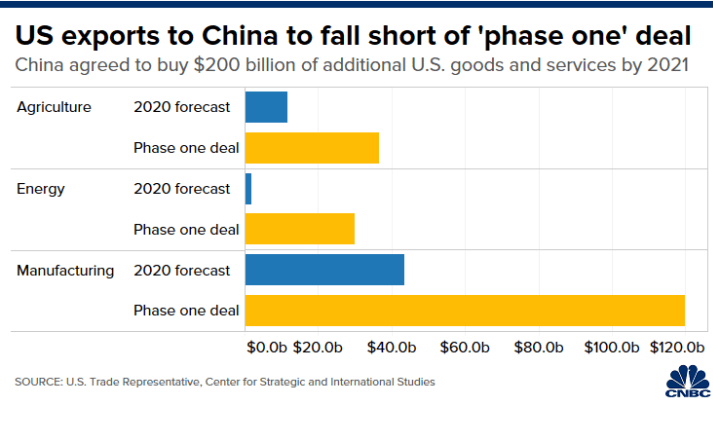 The American think tank projected that exports of U.S. goods to China could come in at only $60 billion for all of 2020 — much lower than the $186.6 billion needed to meet requirements in the agreement that both countries signed in January.

That forecast was “admittedly” a “worst-case scenario” because Chinese purchases of U.S. goods could rise later in the year as the economy recovers, but any increases still “will not change the overall picture, just the details,” Scott Kennedy, senior advisor and trustee chair in Chinese business and economics at CSIS, wrote in a Friday report.

The coronavirus was first detected in China late last year, and Beijing responded by taking measures that many considered draconian — such as locking down cities, suspending public transport and shutting businesses — to contain the outbreak. Those measures led to a plunge in demand for goods and services in China, one of the world’s largest consumer markets.

Consequently, U.S. goods exports to China fell by 10% year over year in the first quarter of 2020, noted Kennedy, citing data from the U.S. Commerce Department. Official U.S. data for services is not yet published, but “it is likely to show a huge falloff due to the collapse of Chinese travel and tourism and the early closing of U.S. universities,” he added.

Several factors were behind the decline in U.S. goods exports to China in the first quarter:

Energy exports were “perhaps the biggest disappointment” after falling by 33.3%;
Sales of commercial aircraft were “essentially at zero” and that of automobiles were down by 46.9%;
Soybean exports were lower by 39.4%;
U.S. failing to take advantage of China’s “sky-high” demand for pork following a swine fever outbreak that caused a shortage of the staple meat. But the coronavirus caused many American meat-processing plants to halt production.

China’s purchases of US goods will fall way short of ‘phase one’ trade deal due to the coronavirus, says think tank, CNBC, May 11