New lows for US oil rigs, will drilling activity rebound?

On Friday, Baker Hughes published a portion of weekly data on the number of drilling workers. The total number of drilling rigs in the United States fell by 34 to 374. This is the minimum number in the history of observations since 1987. Often, changes in drilling activity come with a significant delay from the price. This time the industry was at the centre of the intersection of several influential trends at once – a real perfect storm. It is interesting how long the decline in drilling activity will continue, and at what levels the fall will stop. In 2009, after the reversal of oil prices to increase, the number of rigs was reduced for another six months, and in 2016 it took only three. Even if companies lessen the development of new fields for only three months, the numbers of operating drilling rigs promise to become even more extremely low. 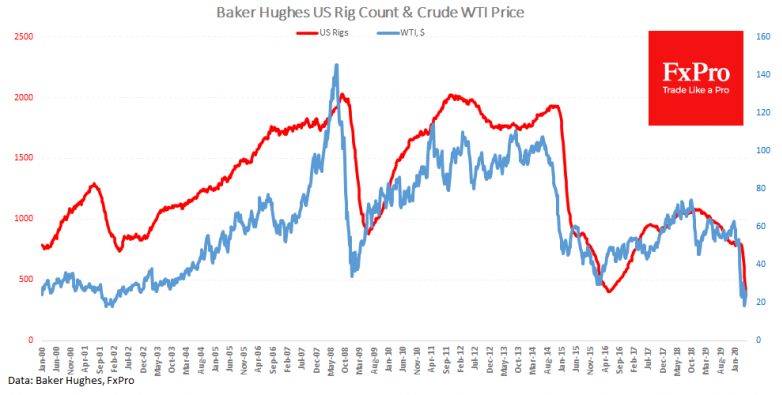 US Crude Oil and Gas rigs fell to historic lows

However, there is another interesting point. The peak in the number of drilling rigs in 2018 was almost half the level before 2014, but production was more than 50% higher. That is, the previous blow did not kill American oil workers but made them stronger. Will it be this time too, or will the new shock to prices turn out to be too powerful? Only time knows the answer. So far, we are leaning more toward the latter: oil prices are too low, and oil reserves are too large for oil workers to sit out.