US unemployment continues to grow, but slower

The number of US Initial Jobless Claims is falling slower than expected, reaching 2.98M for the week ending May 9, vs 3.176M a week earlier and 2.5M forecasted. The decline is too slow, but some people were finding work. This is evident from the slowdown in the growth of continued claims. Over the week of May 2 (the latest data), it increased by 456K, which is just 14% of the number of initial applications for that week. 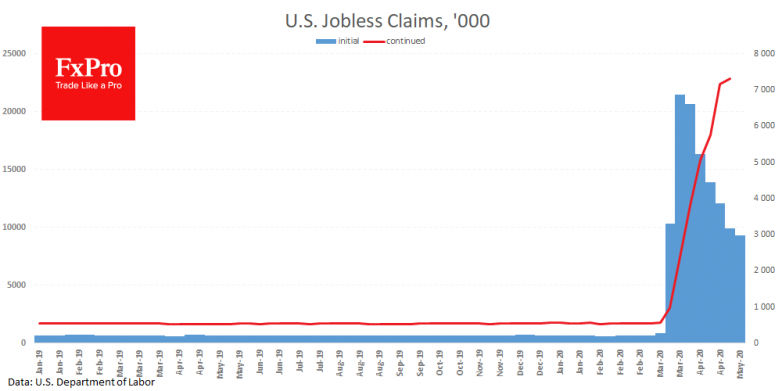 Another 2.98M initial jobless claims over the last week

That is, the labour market is not shrinking as fast as it often writes about it, adding up the number of initial claims in 8 weeks (36.5M). Nevertheless, unemployment still rising despite the beginning of the easting of some restrictions in the USA.

Separately, it is worth recalling that Fed member Kaplan expects US unemployment to increase to 20% in the coming months (vs 14.7% now) and a decline to only 8% -10% by the end of the year. The Fed Chairman Powell noted that 40% of people with yearly income below $40K (relatively low) has no job now.