Bitcoin starts the week on a positive note, adding 3% in the last 24 hours and changes hands for $9,800. At the moment, the most crucial struggle for the first cryptocurrency is unfolding again around the threshold of $10K. With a strong move above 10K, it will break the global downward channel, which may open the door for the coin to grow towards $12K-$13K. However, the probability of reaching these levels will only increase if the resistance around $10K is broken. 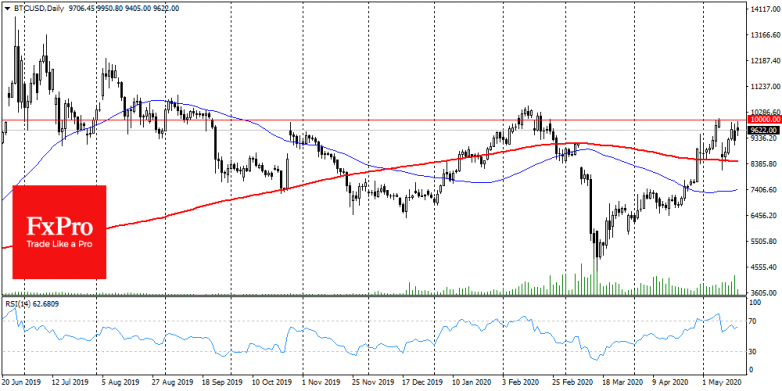 Technical indicators show the importance of the current moment in determining the future direction of the market in the medium term. In the last 24 hours, the Crypto Fear & Greed Index spiked by 10 points to the “neutral” zone at 50. The RSI index for the BTCUSD pair is also in the neutral zone waiting for new triggers.

Bitcoin has grown by 13% over the last seven days. The leading altcoin Ethereum (ETH) added 14% over the week. The total capitalization of the crypto market over the week rose by 13% to $268bn. Overcoming $300bn is also a significant step for the crypto market, as above this level, the coins are facing severe pressure from sellers.

It has been almost a week since halving, and the current price dynamics show quite confidently that the first cryptocurrency was supported after the initial adverse fluctuations due to the decrease in the miners’ reward. The hash rate has fallen, but its scale was not so dramatic, and after recalculation of difficulty and balancing among the miners, the situation is stabilizing. Acute shocks did not occur since everything that happened was predictable.

Glassnode data showed that after halving users took 24,000 BTC off the crypto exchanges. Along with increased activity in private wallets, this may indicate a redistribution of assets in the market, which is considered a positive sign by the crypto community. However, since the beginning of the year, Bitcoin has shown a growth of 36%, which makes it one of the best assets in terms of performance.