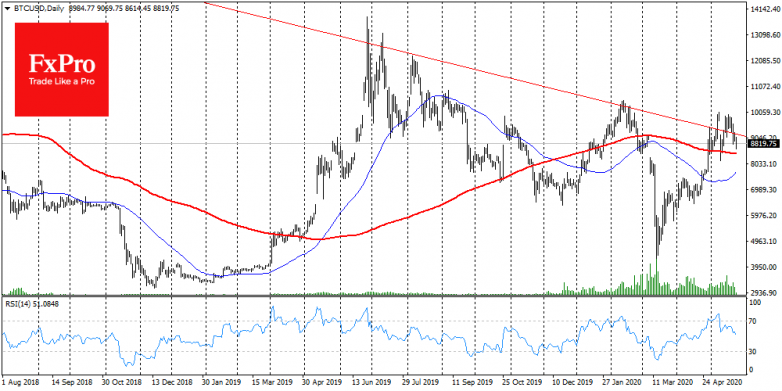 The most unpleasant scenario for the bitcoin now looks like a prolonged sideways trend, which previously resulted in the loss of interest and waning of the market in general. The primary target audience of bitcoin aimed to take advantage of sharp fluctuations in the price of the asset.

Thus, the sharper and more substantial the decline, the higher the chances of the market to attract new capital from investors looking for assets with huge discounts. In any case, bitcoin is currently losing more than 10% over the week, leading the decline among the TOP 10 digital coins. The total capitalization of crypto coins declined by $23bn over the last seven days. Bitcoin domination index fell by 1.5%, to 65.5% over the same period. A decrease in this indicator is usually not bad news for the crypto market, as it confirms the growth in demand for other cryptocurrencies. But this time it is declining for another reason: because of Bitcoin’s problems.

At the end of last week, the crypto market faced a somewhat rare situation: the growth of the total volume of unconfirmed transactions (mempool). At some point, this volume reached its peak since early 2018. Along with the mempool, the commission grew to $7 in the middle of the last week, having lately adjusted to $4.

For the most part, we are witnessing the consequences of halving, as hash rate continues to decline, and similar problems may worsen in the future. Besides, the drought in one of the most popular mining regions of China (10% of the global hash rate), as well as the worsening attitude of the authorities, may deteriorate the situation further.

We likely see only the first signs of a painful market adjusting after the downgrading of the award to the miners. As the ASICs turn off, the difficulty will also drop, but hardly to such an extent that it will attract new participants to the mining business. The net difficulty must decline by several times to offset the slump in revenues. Centralized and scalable crypto projects cannot develop because of the pressure of governments, which are categorically against the emergence of competitors to their monetary power. It is precisely at this moment governments are developing their digital currencies. Recently, we heard the news about digital yuan testing. This weekend, there were reports of the Bank of France testing the digital euro.