During the month, Bitcoin has been trying to break the global downtrend and exceed the $10,000 threshold, but the highs within these rebounds are getting lower each time. There is a feeling that the market is teasing buyers: every time the price is close to the desired round value, the momentum dries up at the last moment. The final attempt stopped at $9,700, from where the gradual decline began. In general, the price dynamics of the last month can be considered as a sideways trend, despite an 8% increase against the levels of a week ago.

The Crypto Fear & Greed Index of Bitcoin is exactly in the middle of the scale, in the neutral zone. Since last week this indicator has grown by 9 points. In the absence of new positive triggers, this may indicate that a new selling wave is approaching. 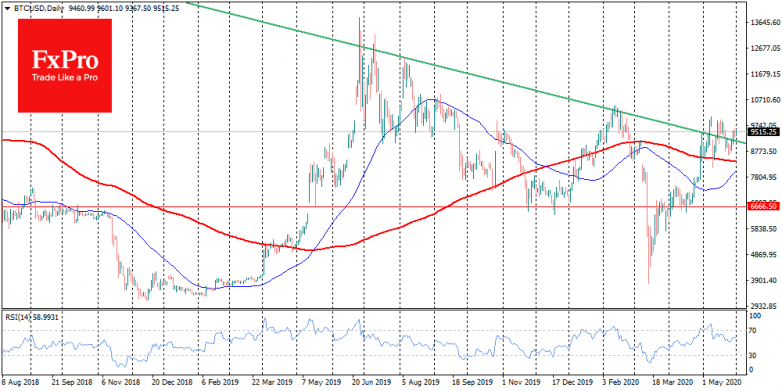 There are also reasons for the positive. Since May 11th Grayscale Investments bought almost 19K Bitcoins for investment purposes, which is much more than the 12K BTC mined in the same period. Of course, this is a separate example, and the volumes are far from those that can seriously “rock” the market by themselves, but in combination with the withdrawal of bitcoins by the whales from the crypto exchanges, this can have a positive effect on the price. The question now is whether the new demand will continue to exceed supply.

In the meantime, the network hash rate has started to rise again. This has been facilitated by the end of a drought in the Chinese province with high mining capacity. In addition, we can talk about the end of the “decompression period” after halving. It is expected that the weak players have left, the strong ones have become stronger and the least ineffective ASICs were turned off. These adjustments have resulted in the price of bitcoin, according to JP Morgan’s estimates, approaching its internal value, although from 2019 it was significantly higher. 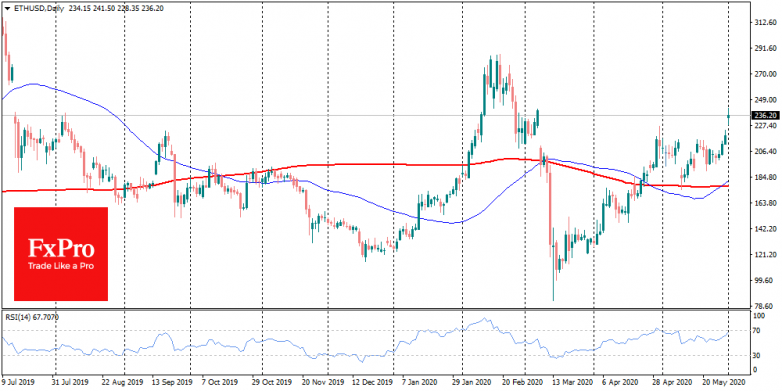 Ethereum climbed more than 18% over the week

During the week, there was a positive price trend for altcoins. One of the most notable coins was Ethereum (ETH), which climbed more than 18% over the week. If recently the coin fought for the threshold level of $200, now it is aiming at $250. According to WhaleAlert, almost $275K ETH (almost $65 million) were transferred between unknown wallets from Sunday to Monday, which is quite a rare event for this coin. The community is waiting for the launch of the second version of the project, while the number of active coins participating in smart contracts is growing in the Ethereum network itself. This is considered an extremely positive signal for the #2 crypto coin.

In addition to ETH, Cardano (ADA) showed impressive dynamics among the TOP-10 altcoins with a 53% growth over the week. The coin rose sharply due to the company’s announcement of the date for a major upgrade of the project, which will turn it into a fully decentralized POS network. Such expectations are “warming up” Ethereum price too. Positive dynamics, in general, was noticeable on many altcoins, which is always a good driver for the market. At some point, the “crypto-train” is able to accelerate so fast that even common-sense cannot limit its growth. The existence of digital currencies is now based on the idea of “speculation feast” and profit-taking.