Bitcoin is up 6% a day and changes hands for $10,100. The coin has not yet emerged from the sideways trend, which lasted about a month. In early May the coin tried to overcome the resistance of $10K but surrendered under the pressure of bears. The current momentum brought BTCUSD back to the peak levels of February. Growth above this resistance area may spur further impulse and quickly bring the coin to $11K. The large-scale withdrawal of coins from circulation by the whales, as well as growing institutional demand through investment companies have led to the desired effect.
Crypto Fear & Greed Index has grown by 6 points over the last 24 hours, switching to “greed” mode. In theory, this could mean approaching a sellout, and if it starts from the current level, it could severely hit the sentiment of the whole market at once, attracting a large number of sellers. The RSI rose to yesterday’s levels but is still far enough away from the overbought zone, which may indicate that there is still potential for growth. 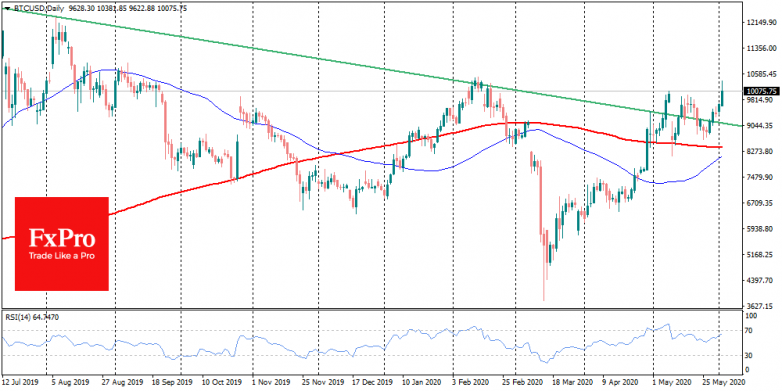