US employment is not recovering as fast as expected. Last week, the initial claims exceeded 1.5M. This was the lowest number in 13 weeks, but significantly higher than the forecasted 1.3M. The same can be said about the continued claims. They fell to 20.54M against 20.6M a week earlier. 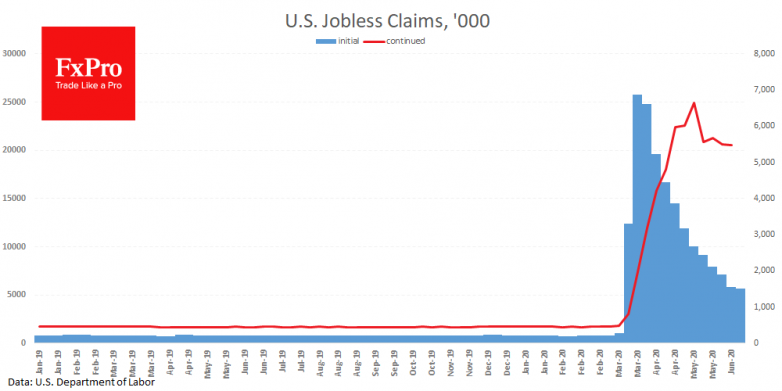 Stock indices and major currency pairs are close to March levels, and some economic indicators show a rebound from April lows. At the same time, one should not lose sight of what the levels were before the crisis: initial weekly calls were then close to 210K with 1.7M in continued claims, that is, 12 and 7 times less, respectively. All this says that America is exceptionally far from the norm, and recovery is getting extremely slow.

The dynamics of the S&P500 over the recent months telling us about the V-shaped recovery expectations. The Fed, by contrast, does not see the labour market to return to the norm over the next two years. So far, the facts are on the side of the Federal Reserve, but the market is far from pessimism.