Bitcoin is in a dangerous sideways trend

Bitcoin has been locked in a sideways trend since the end of April, and in the last week, the dynamic became barely visible at all. During the week, the price has not changed but on the last trading day, the coin has added about a percent. The day before – bitcoin lost about the same amount. Sideway trends rarely end up positive for both the bitcoin and the whole crypto market. This time it doesn’t look like bulls are gathering power for the decisive growth that the miners are hoping for, working at a loss after halving. Currently, the coin fluctuates around the 50-day average, with fairly low trading volumes of around $16bn by current standards. The Crypto Fear & Greed Index and RSI currently reflect the anaemic attitude of investors towards to the bitcoin. 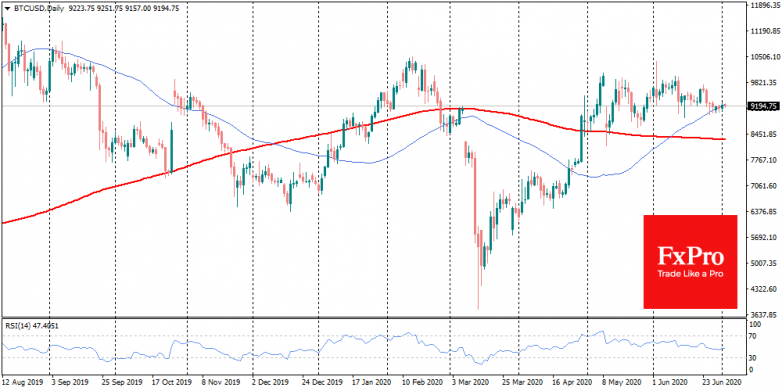 Bidders want to clear the situation with the epidemic, which is already gaining momentum in the U.S., and then may lead to total closure of borders around the world. Complicating the situation is the fact that governments simply do not have the financial capacity to launch national lockdowns again.

Incentives unseen in peacetime cannot forever keep afloat stocks and various business sectors that have taken the brunt of the pandemic. Under these circumstances, there is fertile ground for increased use of bitcoin and other digital currencies. What is bad for crypto, in general, is the fact that institutions are not pure crypto enthusiasts and now they are providing the main liquidity to the market. In March they were selling off coins along with other risky assets when the market switched to high turbulence.

Given the increasing tightening of control over the movement of funds, cash flows will seek ways to move relatively anonymously, quickly, and cheaply between physically closed borders of countries. This fact seriously frightens the monetary authorities of all economies. This is why we did not see the launch of Libra and TON. Nevertheless, there is a global request for such projects and it will be satisfied sooner or later. Swiss banks and offshore companies are quickly becoming a thing of the past.

Who is really loaded with optimism on the market are the miners. It is unbelievable, but a fact: bitcoin producers were able not only to stay afloat after halving in mid-May but also to bring the network hash rate closer to previous levels. The same processes are happening with a difficulty that is gradually returning to the previous levels.

Everything that happens can speak about one important factor: the miners are expecting the return of crypto growth. In the past, halvings led to significant growth in bitcoin and the entire crypto market. However, now all positive expectations should be adjusted to the fact that the market is unlikely to follow the expectations of the masses. At least, it may happen in other time periods. 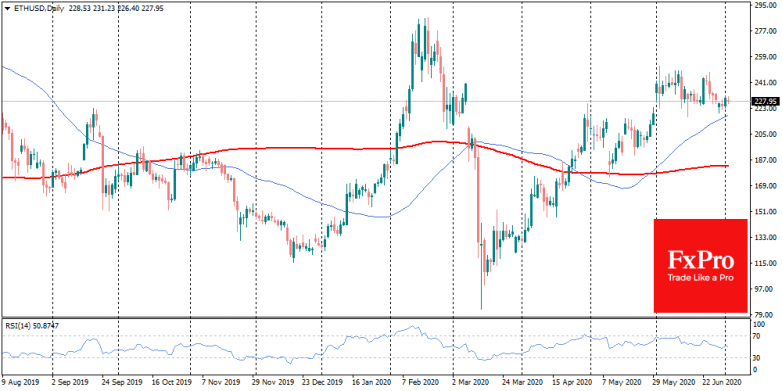 The leading altcoin Ethereum (ETH) is growing moderately and trades at $230. The coin is helped by Buterin’s promises to gradually increase the network speed, which should reach 100K transactions per second. In the meantime, network updates are constantly postponed. For example, the Berlin hardfork, which should be the next step towards Ethereum 2.0, has been postponed until August. However, faith in the ETH future is still strong enough that the coin price can keep reached levels and aim for new ones.