Bitcoin is standing at around $9200, while trading volumes remain pressed around $15bn. Bitcoin is showing a slight percentage increase over the week. The Crypto Fear & Greed Index has been on the border between “fear” and “neutral” territory since last month. The current sideways trend has been in place for 2.5 months, which is quite a long time for the crypto market.

Such a long sideways trend can be provoked by investors who take their bitcoins out of the trading turnover. The Glassnode reports that on July 8th alone, the output of bitcoins from the crypto exchanges exceeded the input by 21K BTC. Similar news has come before, and all this is part of a larger process of asset diversification among institutional investors. Market participants understand that such a prolonged trend could be followed by explosive growth in the crypto market volatility, and are likely to move assets towards potentially quieter harbours.

Miners, which continue to push the hash rate upwards, do not help the situation either. According to Blockchain, another historic high was set on July 8, reflecting the struggle for market share in the mining market. To maintain operational activity, large miners need to sell at least part of the mined coins, but small players can sell up to 100% of mined coins as well as those that were earned earlier. 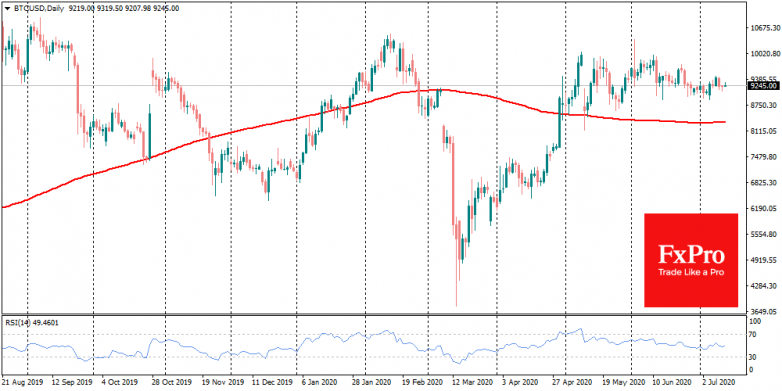 The optimism of the crypto market participants spurred growth in stocks and gold. These are all signs that accompany the boom period in the “growth story” of the markets. In the case of Bitcoin, however volatile the asset is in the short and medium-term, the digital currency shows growth in the long-term. Bitcoin has grown by 29% since early 2020 and has tripled in price over the last 3 years.

The stars of the last 7 days are altcoins. Among them are Cardano (ADA) with 34% growth, Chainlink (LINK) with 59% growth, and Stellar (XLM) with 37% growth. Other altcoins have also shown quite good dynamics. The Bitcoin dominance index fell by almost 3% over the last week, reflecting growing investor demand for altcoins. Of course, the situation is not even close to what we saw in mid-January 2018 when the Bitcoin domination index was at 33%, but overall it is moving in the right direction, indicating a revival of interest in digital currencies in general. Given the global situation, tightening the rules for transfers between individuals and deanonymization, demand must find its way to the wallets of non-professional investors and ordinary smartphone users who still need to transfer money relatively anonymously and cheaply to each other.