The altcoins are again trying to challenge Bitcoin

At the end of the working week, the crypto market shows a moderate decline, which has the potential for intensifying. The Bitcoin’s sideways price trend remains in place, which is both good and bad news. A decrease in trading volumes to $15 billion indicates that the current levels are not interesting for most players to buy or sell, but still holds the price above $9,000. On the other hand, a long lull almost always ends in a surge of volatility. 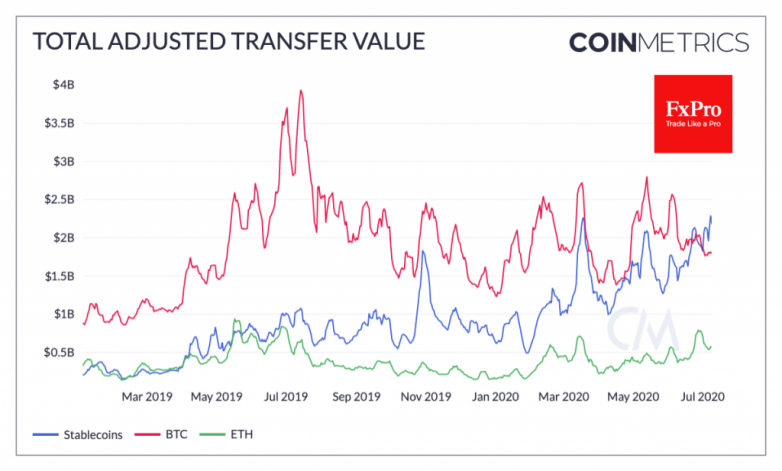 A high correlation between bitcoin and the stock market is on everyone’s lips. The traditional market was in the red on Thursday morning and risks pulling down the crypto market as well. Although the Bitcoin has been around the lower bound of $9K for a long time, this does not mean that there are no changes around other digital currencies. In particular, it is worth paying attention to stable cryptocurrencies which are showing a steady increase in demand. Coin Metrics’ data showed that the volume of transmitted value via stablecoins exceeded $2 bln in June, while the same indicator for Bitcoin fell below $1.8 bln. Growing demand for stablecoins is a logical response of the market due to the need for cheap and fast transfers across country borders. 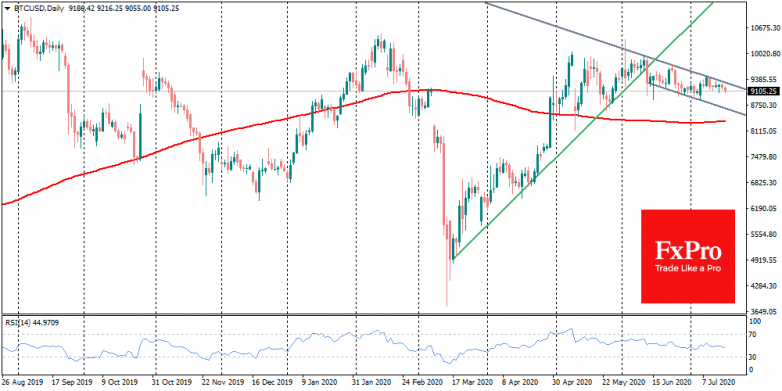 FTX’s low capitalization altcoins index has shown a 144% growth since the beginning of 2020, twice as much as Bitcoin. Growth in demand for alternative cryptocurrencies with low capitalization has been clearly seen in the recent dynamics of altcoins. The demand for small coins demonstrates that the crypto market’s participants still have hope to find the next “unicorn”. Probably, this demand has retail roots, as the interest of institutions is concentrated on the most liquid instruments.

Among altcoins, Ethereum should be singled out, after showing more than a two-fold increase in the number of active wallets since the beginning of the year, several times ahead of the Bitcoin by this indicator. In this case, this growth may be influenced by DeFi (decentralized financial applications), as well as the work of other altcoins (including stablecoins) based on the Ethereum platform. Since the beginning of the year, the ETH price has increased by 79%, which also reflects market participants’ confidence in the platform ecosystem.

From all this, we can make a conclusion that there are many projects trying to challenge the Bitcoin. However, the first coin has more than once coped with such challenges, often remaining “in the saddle”. Recently, the miners were supposed to massively shut down their ASIC’s after halving. However, in mid-July 2020, the first cryptocurrency still “keeping an eye” on $10K, the miners are increasing their production capacity, and the nearest Bitcoin competitor needs to attract more than $140 billion in capitalization to challenge the first digital currency.