Bitcoin managed to hold above $11K and keeps growing. Other coins are also supporting the momentum. In the last 24 hours, the benchmark BTC has grown 3% and is traded for $11,750. With the end of the working week approaching, BTC has grown by almost 7% over the last 7 days. Closing the week in close proximity to, or above $12K would be the best evidence of favourable prospects for the crypto market. 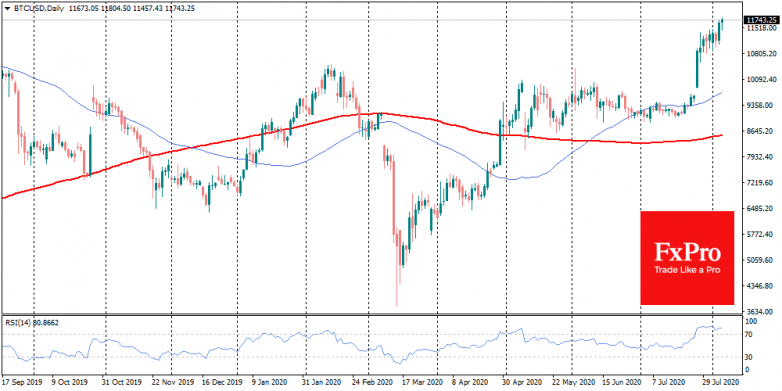 The total capitalization of the crypto market jumped by $32bn over the last 7 days, which increases the speculations of a new rally. However, one should be very cautious about the current dynamics as technical indicators reflect the market condition as being overbought.

The Crypto Fear & Greed Index is in the area of “extreme greed”, which at least encourages serious caution. Ever since institutional money appeared in the crypto market, digital currencies struggle to grow in the environment of “unshakable faith”. There is a more tangible dependence on technical indicators and a clearer peg to what is happening in the traditional market. Nevertheless, this is the “adulting” period for digital assets, which will attract more large capital over time. 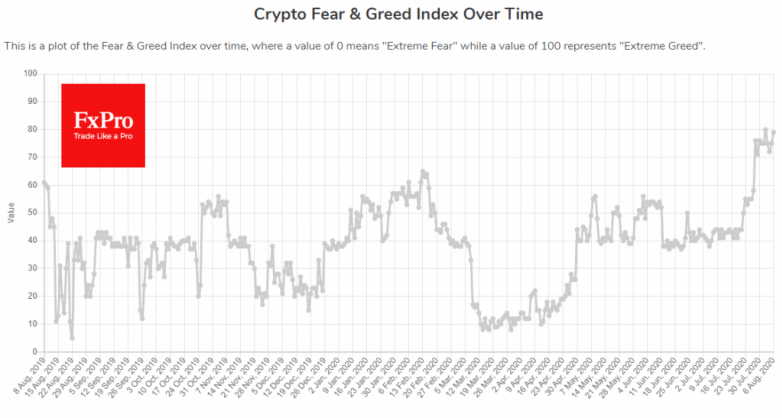 Gold has crossed the most important threshold level of $2K, which is inevitably compared to the positive impulse for the bitcoin. Bitcoin correlations have been a very common topic in recent times, but a really strong impulse would be a completely different scenario. The real driver for Bitcoin and altcoins would be growth against the background of a falling traditional market.

According to Nakamoto’s initial idea, cryptocurrency is a counterbalance to the traditional financial market. Of course, Bitcoin couldn’t enter the mainstream without the support of money from Wall Street, but they shouldn’t become friends. Both retail and institutional investors are now looking for a direction to invest, and the digital currency market could well become such a direction. In 2017, the growing popularity of digital currencies led to technical problems associated with scaling. Since then, infrastructure has grown significantly, but this does not mean that the leading coins won’t face serious trials.

In the near future, Ethereum will have to pass the test due to the growing popularity of DeFi, and in the future of all digital currencies will have to face security and scaling issues, which will result in the crypto market either moving to the next stage or rolling back in an attempt to solve their problems.