The most expensive crypto currency? Not Bitcoin

Bitcoin is holding near $12K, but the correction was not large enough to push the coin below $11,500. For the first time in recent days, the Greed and Fear Index has started to decrease. In the last 24 hours, it has fallen by 5 points, switching from “extreme” to just “greed”. The RSI for the BTC/USD pair is moving away from the overbought area with a sharp downward movement. 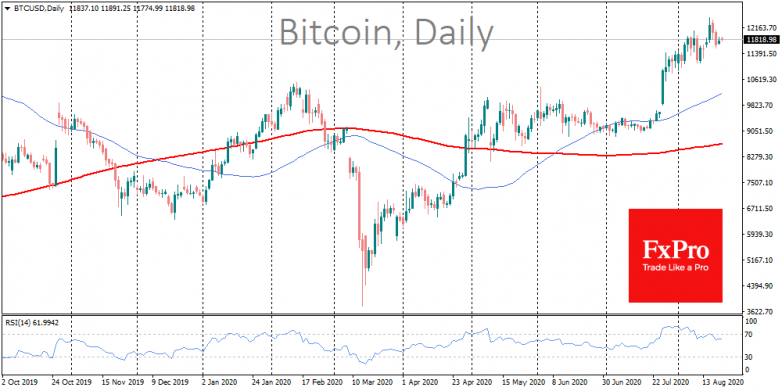 The Blockchain data shows a decrease in the hash rate in the Bitcoin network, and this is not due to price corrections, but to flooding in Sichuan Province. In a broad historical perspective, the technical performance of the network capacity reflects the miners’ confidence in the prospects of the first crypt currency being at historical highs.

CoinTelegraph found that the Bitcoin RSI is now repeating the dynamics after halving in 2016, which pushed BTC to all-time highs near $20K in less than 1.5 years. So far this year, Bitcoin has grown 63%, despite all the shocks faced by the global economy.

The yearn.finance (YFI) coin has become the altcoin star recently. Its price soared to $15400, the costliest coin in the crypto market. In a month it has shown twentyfold growth, living proof that “unicorns” still exist, at least in crypto. The rapid growth of the coin also reflects the popularity of the decentralized financial sector. The creators of the project decided to follow the Bitcoin path, limiting the issue of only 30,000 YFI coins. Such limited supply spurs rapid price growth.

Bitcoin was created as a response to the crisis and the thoughtless policy of central banks, in which case it could be assumed that the cryptocurrency will get its impetus in the new crisis. However, this may be a different crisis, where there will be neither winners nor losers.