Different corrections of Bitcoin and Ethereum

Bitcoin failed to continue to grow after again touching $12K, as the bears took control, pushing the market sharply down. In the last 24 hours, the benchmark cryptocurrency has lost over 4% and currently trades around $11,300. Is it worth waiting for the decline to continue? The Crypto Fear & Greed Index for Bitcoin and large coins is still in the “extreme greed” area, which often means a high probability of a sell-off.  On the contrary, the RSI for BTC/USD pair is moving further away from the overbought area, showing a particularly sharp decline over the past few days. If the BTC can stand around the current levels or bounce to a broken support area of about $11,500, there is a chance of seeing the initiative return to buyers’ hands. 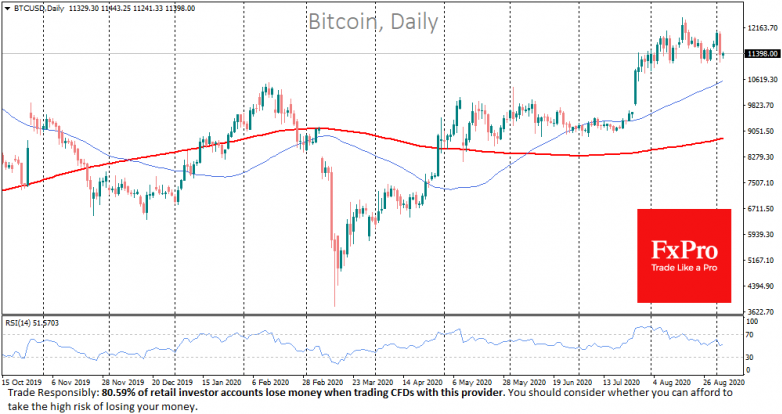 The main altcoin Ethereum (ETH) is losing more, dropping over 9% in a day. In this case, we are witnessing a correction after impressive growth, as even with the current decline, ETH shows more than 12% growth over the week. This is because Ethereum plays in many sectors at the moment and always wins. Also, the project provides high commissions for the miners. Thus, on September 1st, Ethereum miners earned a record $17 million due to the high demand for Ethereum blockchain. It remains hopeful that the project will withstand the load on the network and prove its scalability, which will result in even greater growth in demand for ETH.

In 2017, in the times of mining-FOMO, many people remembered that during the gold rush manufacturers of shovels were among the main winners. In 2020, the “shovel” is Buterin’s project, providing its own blockchain as the basis for other crypto services. Now investors can get to the crypto market through Ethereum, earn money on DeFi applications that run on Ethereum, and withdraw money into stable cryptocurrencies based on Ethereum. Not a single word about Bitcoin and this is the reason why the price of the first cryptocurrency is so reluctant to grow. It seems that institutional investors and speculation of infrastructure are not enough to grow. 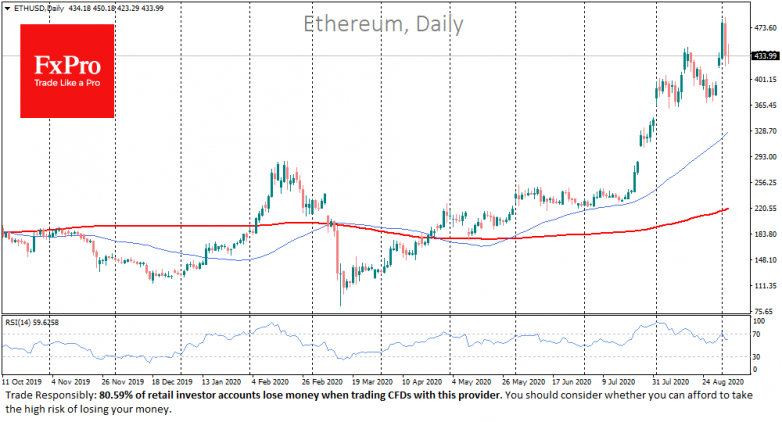 If the entire crypto market falls, DeFi crypto coins show unexpected stability. Concerns have been growing recently that it is the sector of decentralized financial applications that could launch the next massive wave of correction. The incredible scale of growth in recent weeks has indicated a high probability of a correction. However, the UMA and Yearn.finance coins have grown by 14% and 3% respectively. According to DeFi Pulse, at the moment more than $900 million is blocked in Yearn Finance, while in the DeFi sector as a whole more than $9 billion is blocked. Despite such impressive growth, there is an opinion that yearn.finance token is still undervalued, given its small emission and the prospects of increasing funds that will be blocked within the protocol.

It is likely that in the medium term we will see a further decline in the Bitcoin Domain Index and on the other side Ethereum growth, whose capitalization has almost doubled since late July.