Almost all the cryptocurrencies from the top 100 list show a slight decline at the beginning of the working week, including bitcoin, which is losing about a per cent to $10,400. The crypto market is waiting for new internal and external triggers. 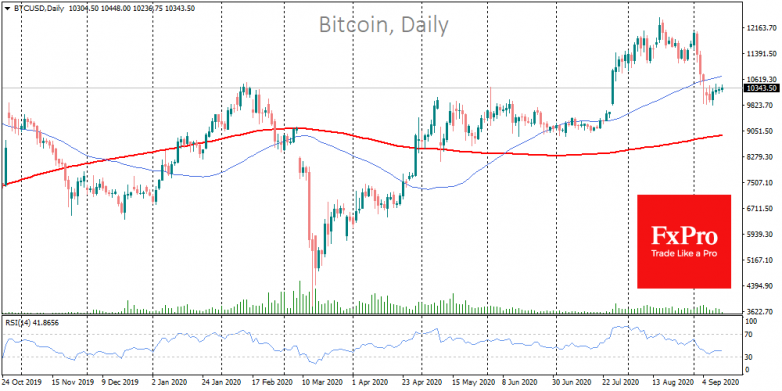 Glassnode found that nearly 10% of awards to miners are spent on transactions to place bitcoins on exchanges, which creates conditions for more increased pressure on the bitcoin. On Sunday, the bulls tried to push bitcoin above $10,500, but again they faced strong resistance at that level and it remains locked in a fairly narrow range slightly above $10K.

WhaleMap identifies levels of concentrated large amounts of bitcoins that have not moved since being deposited in wallets. This analysis shows that the $10,600-$11,300 areas can act as serious resistance levels in the short-term.

Despite the moderate decline of the leading cryptocurrencies, in the last 7 days, the total capitalization has increased by more than $13 billion. In addition, since the beginning of the year, bitcoin has grown by 44%. 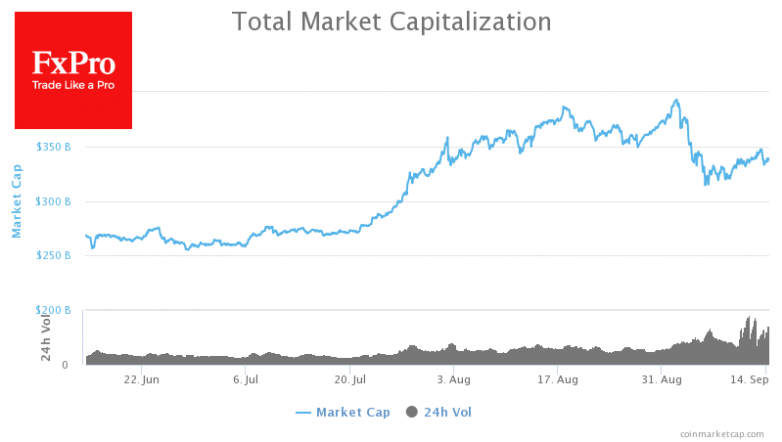 Decentralized financial applications secure not only ETH or new stars of the crypto market like YFI, but also Bitcoin. According to DeFiPulse, the number of bitcoins locked in applications from September 2 to the present moment has increased by 31% to almost 88k BTC, showing a historical maximum. More than half of the locked bitcoins are based on the Ethereum platform in WBTC. The WBTC token itself duplicates the price dynamics of the original BTC. Thus, the developers have combined the basic characteristics of the bitcoin and the flexibility of ERC-20 tokens. The token is fully backed by bitcoin.

Meanwhile, central banks are preparing their response to digital currencies. It became known that MasterCard is launching a test platform that will allow central banks to test their national tokens. Probably, the launch of such national cryptocurrencies will hit the stablecoins first, so the next step in this sector may be the appearance of anonymous stablecoins.

After the launch of national tokens, the global banking system will switch to the next level of deanonymization, and the current crypto market will turn into a new type of “superstructure” over the traditional banking system, providing the lost level of anonymity that was previously provided by cash. As cash usage decreases and bank compliance tightens, people are trying to find this anonymity in cryptocurrencies.