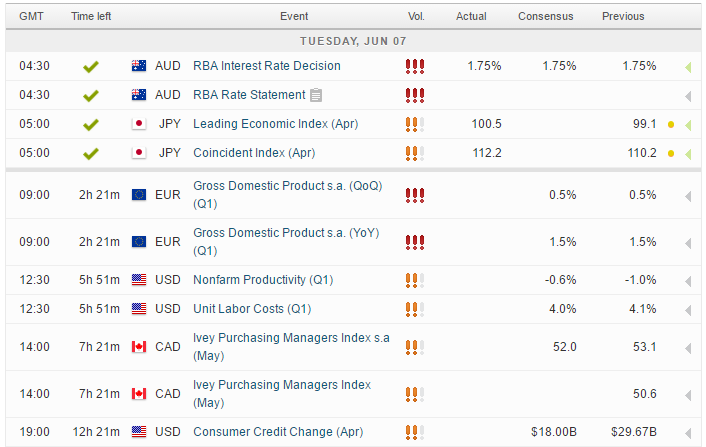 UK retail numbers rebounded. According to the Confederation of British Industry’s monthly retail sales rebounded to 7 on CBI’s index. This was in line with expectations in a Reuters poll and up from -13 in April. April number was the lowest reading since the beginning of 2012. At the same time expectations for June fell to -5, the weakest month-ahead reading since mid-2013. According to the CBI orders placed with suppliers fell at the fastest pace since March 2009.

RBA remained put. The Reserve Bank of Australia keeps the rates at record low levels at 1.75% as it sees sustainable growth in the economy. The bank regards the current policy consistent with the economic situation. The decision was widely expected but still AUD rallied against all the major counterparts except CAD. While Australian dollar lost 0.1% against CAD it gained 2% against JPY. In the light of this wording from the central bank it appears that further rate cuts aren’t likely. However, should the economic conditions worsen RBA surely will consider further rate cuts.

The UK “Remain” campaign that supports the idea of staying in the European Union has a narrow one-point lead over the “Leave” campaign, according to a YouGov poll for the Times posted Monday. According to the latest YouGov poll 43% of respondents intend to vote to keep Britain in the EU, while 42% support an exit vote in the referendum. Britons will vote on June 23 on whether to remain in the 28-member bloc.

Chair Yellen didn’t provide any fresh insight on the timing of the next rate hike, leaving the door open for action over the next several months. Fed Chair Yellen reiterated gradual funds rate hikes are likely appropriate if conditions met, including labor market strengthening and rising inflation. Giving a nod to Friday’s employment report, she warned “one should never attach too much significance to any single monthly report.” Nevertheless, it’s still an important indicator and the Fed needs to monitor the conditions carefully, she added. Generally she noted that overall labor market developments have been quite positive, though she also cited several negatives, including high unemployment rates among various minority groups. Elsewhere, she believes foreign financial and economic conditions have stabilized. That she sees positives outweighing the negatives, the FOMC will remain on course for more normalization this year, and we still see July very much on the table. Fed takes its mandate and objectives from Congress, she said, in answering a question on whether the FOMC’s primary concern is GDP growth and the unemployment rate over the next few quarters, relative to the degree the Fed looks at the negative effects of low rates (including risk taking behavior). She also stressed the Fed not only looks at the near term, but at the medium and longer terms as well.