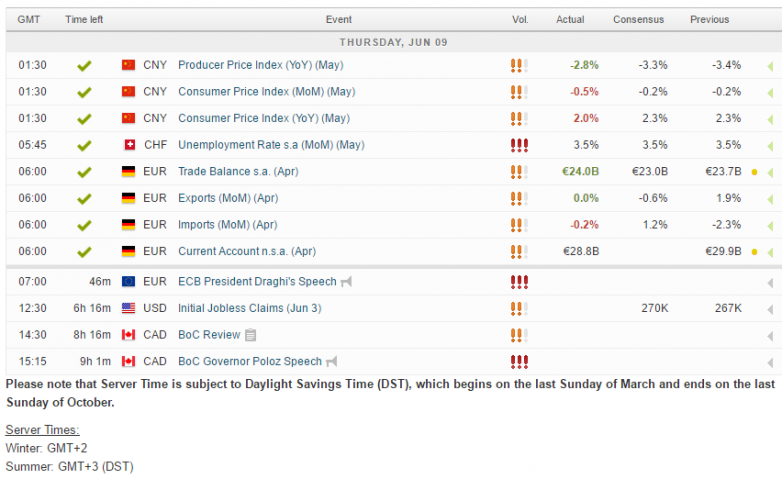 European Outlook: Asian stock markets headed south, with Japan underperforming as the Yen strengthened ahead of BoJ and Fed meetings. Weaker than expected machinery orders added to pressure. Chinese CPI was much weaker than expected and PPI better than expected adding to the raft of very mixed news. U.S. and U.K. stock futures are also heading south despite ongoing advance in oil prices, with the front end WTI future rising further above USD 51 per barrel. Released overnight the RICS U.K. house price balanced dropped more than expected and fell back to 19% in May, while April was revised down to 39.% from 41%. French non-farm payrolls were revised higher to show a rise of 0.3% q/q in Q1. Still to come, Germany and the U.K. release trade data but the focus will likely be on Draghi’s speech at the economic forum in Brussels.

RBNZ maintained the OCR at 2.25%, but maintained scope for further easing if economic data suggest the need. Governor Wheeler said, “Further policy easing may be required to ensure that future average inflation settles near the middle of the target range. We will continue to watch closely the emerging flow of economic data.” The move was anticipated, however, some analysts were suggesting a cut could be possible. The NZD soared on the news to a one year high with the NZDUSD currently trading at 0.7135.  Governor Whelers view on further easing later this year remains consistent and in line with many in the market including ourselves.

Bank of Korea cut rates by 25 bps to 1.25%, upending expectations for another steady 1.50% setting. The surprise cut was driven by concerns the government’s efforts to restructure indebted firms is weighing on the broader economy. A worsening outlook for the economic growth suggested that a rate cut would happen in the near term. The government’s plans to create a fund to facilitate corporate restructuring appears to have prompted them to add stimulus now as opposed to later as they sought to offset any negative impacts such as lost jobs or reduced investment.