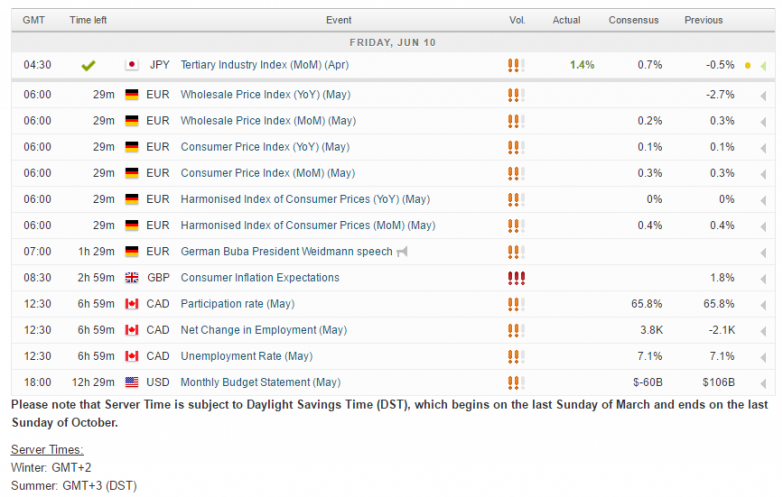 European Outlook: Asian stock markets declined in holiday thinned trade, following on losses on Wall Street and Europe yesterday. China and Taiwan were closed for a holiday. U.S. and U.K. stock futures are also down. Oil prices retreated, putting pressure on commodity companies and investors are holding back ahead of Chinese data releases over the weekend and the Fed meeting next week. More support then for core European bond futures, with 10-year Gilt and Bund yields already touching new record lows yesterday. Comments from ECB’s Jazbec, who confirmed the central bank’s wait and see stance, saying there is no need for new stimulus at the moment, may keep a lid on Bunds, however. The calendar has final German inflation data and French production numbers as well as Norway CPI data.

Japan tertiary Industry activity: A surprise rise in the level of services purchased by businesses for June to 1.4% near double expectations of 0.7%. The may figure was also revised higher to -0.5% from -0.7% April was -0.1%. USDJPY traded higher and is currently north of 107.00.

Brexit Would Undermine Europe’s Reform Prospects: The Brexit referendum on June 23 and the Spanish election on June 26 could well turn out to be decisive for the future of the EU, but also the monetary union. If the U.K. decides to leave and protest parties win the day in Spain, the chances of any real structural reforms in Europe will get ever more remote. At the same time a U.K. exit would set a dangerous precedent and play into the hands of protest parties in Germany, which are already calling for Germany’s exit from the Eurozone.

US Reports: revealed upside wholesale trade surprises and a tight round of claims figures that raised GDP prospects for both Q1 and Q2, and lifted our June payroll estimate to 210k from 200k. June payrolls will benefit from a reversal of May’s Verizon and weather distortions. We raised our Q2 GDP growth forecast to 2.6% from 2.4%, after a boost in Q1 GDP growth to 1.2% from 0.8%. We saw firm April wholesale inventory and sales data after a March inventory boost that left a second month of increases and a third month of stronger sales than inventories. For claims, we saw a 4k drop to a lean 264k that left a five-week string of declines that unwound elevated May levels.