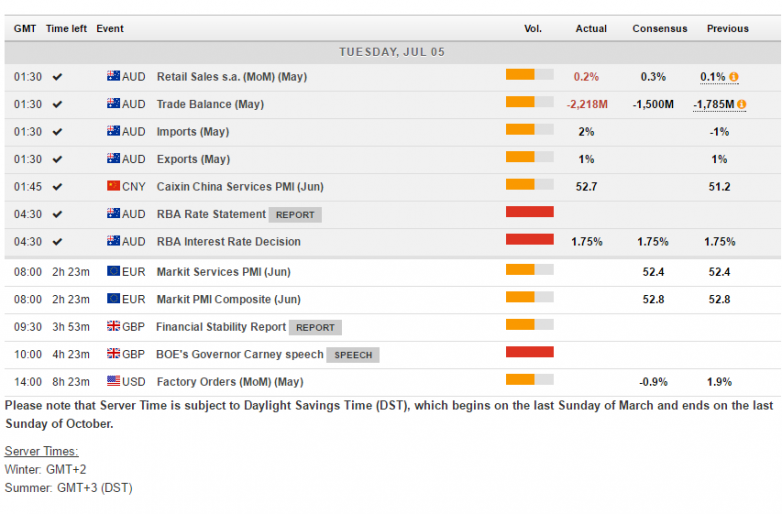 European Outlook: Asian stock markets outside of mainland China headed south US and UK stock futures are also down. A stronger Yen weighed on Japanese markets and lower oil prices saw energy companies retreating. The front end WTI future fell below USD 49 per barrel as global growth concerns flare up again. That the U.K’s departure from the EU will hit growth on both sides of the channel is becoming clear and global growth concerns are also flaring up again. Growth indicators are starting to move back in focus and fresh concerns about Italy’s banking system are weighing on the Eurozone, while the political chaos in the U.K. continues. The main players of the “Leave” campaign now have both resigned and both major political parties seem in disarray, which only adds to the confusion about the long term relationship between the U.K. and the rest of the EU.

AUD leaves cash rate unchanged at 1.75%: Keys points from Governor Stevens’s statement include: Global markets have been volatile, but inflation low and likely to remain so. Australian growth set to continue, low interest rates are encouraging domestic demand and a rising AUD could complicate economic adjustments. The impact of Brexit to global economy remains to be seen. Statement viewed as less dovish than expected. Key data will be CPI figures due July 27 to inform their August decision.  Earlier Retail sales were much weaker than expected, the AUDUSD spiked to 0.7543 before falling back to 0.7500 and is currently trading at 0.7520..

UK Business Expectations drops sharply following Brexit:  UK business pessimism doubles in the week following Brexit with 49% of surveyed businesses pessimistic on the economic outlook for the next 12 months compared to 25% pre-Brexit. An index published by YouGov and the Centre for Economics and Business Research also fell from 112.6 to 105 in the three days following the referendum.  Cebr Director Scott Corfe commented to Bloomberg. “Not only are businesses feeling much more pessimistic in general about the state of the economy, but their own expectations for domestic sales, exports and investments over the next 12 months have gone off a cliff.” Bloomberg also reported that over 75% of economists that they surveyed expect the UK to slip into recession.

Australian Retail Sales miss: Low 0.2% growth in Retail sales missed expectations of 0.3% and the previous month was revised down to 0.1% from 0.2%. Deflation remains a potential problem and adds weight to the hawks on the RBA wanting to see an interest rate rise. Retail sales topped AUD290 billion last year and the sector is Australia’s second largest employer with 1.25 million workers. John Durkan, managing director of the giant Coles supermarket chain said recently. “I anticipate we’ll be dropping prices over the course of the next 5 years, and I don’t see prices increasing during that period.”