US Department of Agriculture lowered world soybean production forecast due to lower expected soybean crop in South America because of floods in Argentine and dry weather in Brazil. Soybean prices rallied after the USDA report. On Thursday the official export figures showed US soybean exports for 2015-16 were lower than expected. Will the sentiment for soybean turn bearish after lower export report?

Soybean prices jumped 4.2% on May 10 as US Department of Agriculture forecast falling US and world stocks due to lower South American crop estimates and heavy US crushing volumes. For the ending 2015-16 season the USDA World Agriculture Supply and Demand (WASDE) report forecasted soybean stocks at 74.25m tonnes, nearly 3m tonnes down from its forecast last month, and about 2m tonnes lower than analysts expected. For the end of 2016-17, the USDA expects stocks to be down to 68.21m tonnes, a three year low, and some 5m tonnes below market expectations. The USDA cut 2015-16 Argentine soybean production forecast 2.5m tonnes to 56.5m tonnes because of lower acreages resulting from widespread flooding. And 2016-17 crop estimate was marginally higher at 57.0m tonnes. Estimates were lowered also for Brazil due to dry weather: 2015-16 soybean crop estimate was cut by 1.0m tonnes, while 2016-17 crop was estimated 103m tonnes. At the same time US 2015-16 soybean ending stocks were cut by 45m bushels to 400m bushels on higher exports and processing expectations, while 2016-17 soybean ending stocks were lowered by 100m bushels to 305m bushels. Soybean prices rallied on lower supply forecasts. Yesterday soybean prices fell as USDA published US soybean exports figures which were unexpectedly low: exports for 2015-16 came in at 212,400 tonnes, below analysts’ forecast of 350,000 to 500,000 tonnes, and exports for 2016-17 came in at just 6,900 tonnes, below of expected 325,00 to 450,000 tonnes. However, before this bearish development soybean prices got a boost from another bullish news: Brazilian president Dilma Rousseff was suspended by a senate vote on Tuesday and continued political struggle in Brazil may delay the passage of this year farm credit program. The delay of the program will negatively impact Brazil’s soybean crop production. 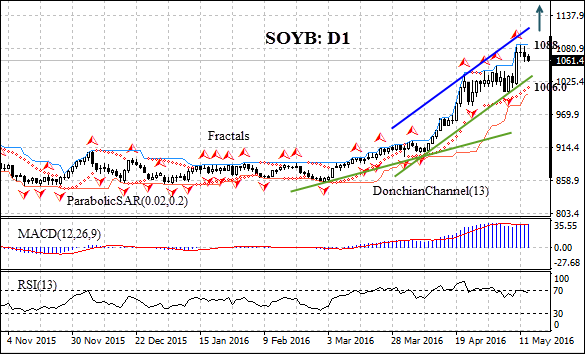 On the daily timeframe SOYB: D1 has been rising since March. The parabolic indicator is giving a buy signal. The Donchian channel is tilted upward indicating uptrend. The MACD indicator is above the signal line and the zero level which is a bullish signal. The RSI indicator is above 50 level but is edging lower, which is a bearish sign. We believe the bullish momentum will continue after the price closes above the fractal high at 1088.0. It can be used as an entry point for placing a pending order to buy. The stop loss can be placed below the last fractal low at 1006.0. After placing the order, the stop loss is to be moved every day to the next fractal low, following Parabolic signals. Thus, we are changing the probable profit/loss ratio to the breakeven point. If the price meets the stop loss level at 1006.0 without reaching the order, we recommend cancelling the position: the market has undergone internal changes which were not taken into account.