The exchange rate of Russian rouble has diverged with oil once again in the global market. Since the start of the year Brent oil, to which the Russian Urals oil is tied, advanced almost 36%. Meanwhile, the US dollar weakened only 11% against the rouble. Due to such a divergence the personal composite instrument Brent_Rub surged. Shall we expect its technical retracement? In the long-term historical period this PCI has been hovering around its 200-day moving average but now has surpassed it by far.

Dearer oil makes rouble stronger against the US dollar and vice versa. As a result, Brent price in roubles gravitates toward its average. In the chart of percentage change of rouble rate and oil prices we may notice their negative correlation. The share of fuel and energy goods in country’s exports to the far abroad fell to 60.7% in January-April 2016 from 68.1% in January-April 2015, according to Russian Federal Customs Service. Their share in exports to CIS countries fell to 38.9% from 44.5%. We believe this partly explains the divergence in oil and rouble prices. Nevertheless, we believe the current divergence is too big so Brent_rub may return to its 200-day average line. Rouble may strengthen on low inflation in Russia and optimistic outlook by Russian Central Bank. Since early 2016 to June 6 prices rose only 2.9% compared to 8.5% in the same period of 2015. The Central Bank of Russia cut the interest rates on Friday to 10.5% for the first time in 11 months. It expects the Russian GDP to increase 1.1-1.4% in 2017 while in its March forecast it predicted the 0% growth next year. The outlook for main indicators for this year was also revised up. In the meantime, lower global oil prices may push up its production in the US. According to Baker Hughes oil service company, the active oil rigs count rose in US by 9 to 325 while oil prices are above $50. 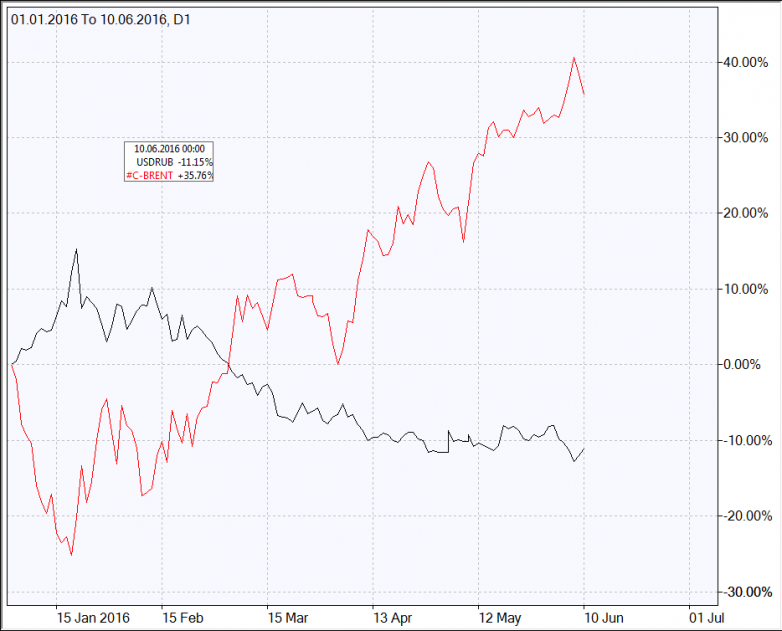 On the daily chart Brent_Rub: D1 has come close to two rising channels. The MACD gives signal to sell. The Parabolic signals are so close to each other that may be considered neutral. RSI has left the overbought zone and formed negative divergence. The Bollinger bands have widened which means higher volatility. The bearish momentum may develop in case the personal composite instrument breaks down through both trend lines and falls below last fractal low and Parabolic signal at 3355. This level may serve the point of entry. The initial stop-loss may be placed above the Parabolic signal and the last fractal high at 3500. Having opened the pending order we shall move the stop to the next fractal high following the Parabolic and Bollinger signals. Thus, we are changing the probable profit/loss ratio to the breakeven point. The most risk-averse traders may switch to the 4-hour chart after the trade and place there a stop-loss moving it in the direction of the trade. If the price meets the stop-loss level at 3500 without reaching the order at 3355, we recommend cancelling the position: the market sustains internal changes which were not taken into account.