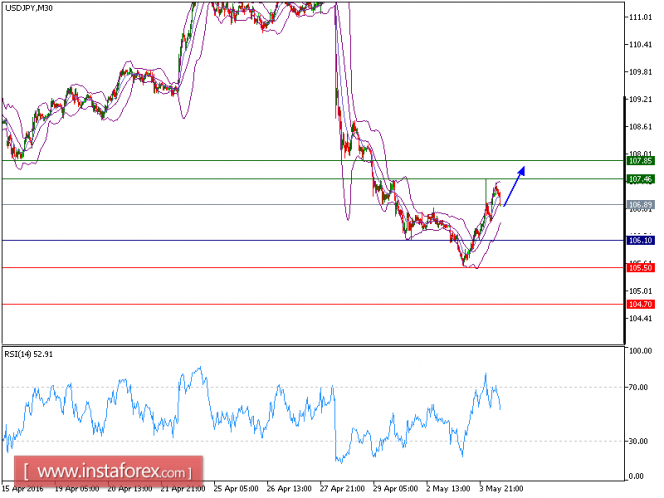 USD/JPY is expected to continue its rebound. Overnight, US stock indices closed lower, pressured by shares in energy, bank and materials sectors. Investors were concerned about contracting manufacturing activities in China as well as falling oil prices. The Dow Jones Industrial Average dropped 0.8% to 17750, the S&P 500 fell 0.9% to 2063, and the Nasdaq Composite was down 1.1% to 4763.

The British pound was impacted by an unexpected contraction in British manufacturing output (the Markit/CIPS Manufacturing PMI fell to a three-year low of 49.2 in April from 50.7 in March), as well as the ICM poll which showed a lead by the "Brexit" camp over the "In" camp. GBP/USD dropped 0.9% to 1.4533.

Commodities-linked currencies lost heavily against the greenback, with USD/CAD surging 1.5% to 1.2719 and NZD/USD falling 0.9% to 0.6912. In addition, Australia's central bank surprised the market by cutting its main interest rate by 25 basis points to 1.75% (vs holding the rate steady at 2.00% as expected), causing AUD/USD to sink 2.4% to 0.7483. The pair posted a strong rebound overnight after marking an 18-month-low at 105.52. Currently it is trading above the 20-period (30-minute chart) moving average, which has crossed above the 50-period one. And the intraday relative strength index remains above the neutrality level of 50. As long as the level of 106.10 holds as the key support, the intraday outlook continues to be bullish, and the pair is expected to return to the first upside target at 107.45 (a key resistance seen on April 29).