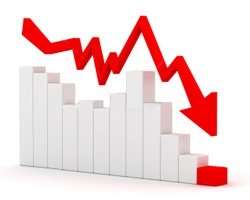 The PMI services data from the United Kingdom was released and it was worse than expected. The investors anticipated a 0.1 point decline from the last month's level of 53.7 points, but the issued number was 52.3 points. The index is important because the U.K. services industry accounts for more than three quarters of the U.K. economy. The recent set of data on the manufacturing and construction PMI was disappointing as well. It seems that the U.K. economy is slowing down ahead of the EU referendum in June 26th this year. In conclusion,the GDP figures for the second quarter might be downwardly revised and the U.K. economy might face a very tough period.

Let's now take a look at the GBP/USD technical picture in the 4H time frame. The market was capped at the 113%Fibo expansion of the last swing up at the level of 1.4770. Since then the clear impulsive sell-off towards the next important support made bulls to question their control over this market. Nevertheless, as long as the price stays above the golden trend line support and the level of 1.4000 (higher low) bulls are still in control over this market.