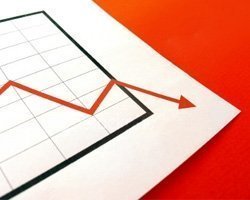 The Non-Farm Payrolls figures widely disappointed market participants as the US labour market lost steam in April. According to the Labor Department, non-farm payrolls rose by 160,000 jobs last month, which was the fewest number of jobs in seven months as market participants expected a rise to the level of 205,000. Moreover, the downward revisions added fuel to the fire as in February and March the jobs market generated 19,000 jobs fewer than previously estimated. The unemployment rate was unchanged at the level of 5.0%, but the number of Americans participating in the labour force decreased to 62.8% in April from 63.0% in March. The only good news was that the average hourly earnings climbed 0.3% to $25.53. In conclusion, after December's hike, the Fed has already dropped the rhetoric of at least 4 rate hikes to a maximum of 2 rate hikes this year. Nevertheless, with the figures like this, the Fed is nowhere near hiking rates in June and meeting the inflation target of 2% this year.

Let's now take a look at the EUR/USD technical picture on the 4H timeframe. After the swing high was established at the level of 1.1615, the market is slowly sliding lower in a nice parallel channel. There is no sign of a lower low yet, so we can be sure the longer-term top is in place, but if the market closes today below the current support at the level of 1.1396, the odds for a further drop will increase. The next support is seen at the levels of 1.1311 and 1.1215.