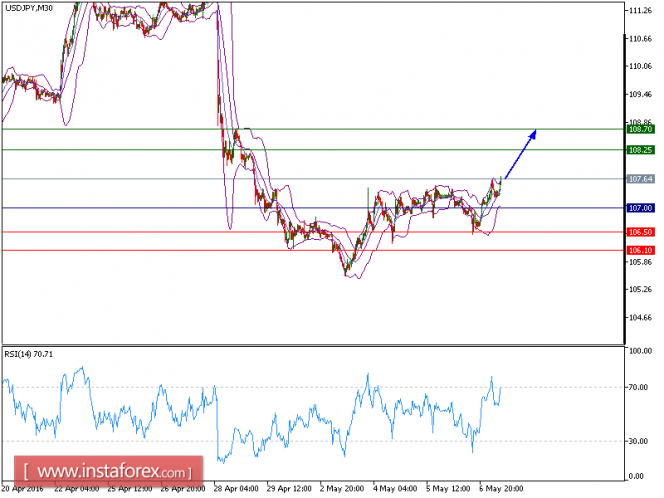 USD/JPY is expected to trade with a bullish bias. Last Friday, US stock indices settled higher despite disappointing April payrolls data. Commodities and industrial shares were the best performers. The Dow Jones Industrial Average rose 0.5% to 17740, the S&P 500 gained 0.3% to 2057, and the Nasdaq Composite was up 0.4% to 4736.

At the same time, the Australian dollar was impacted by the Australian central bank's lowered CPI growth forecast for 2016 (to 1%-2% on-year from 2%-3% previously forecast). The central bank also said: "The board will continue to assess the outlook and adjust policy as needed to foster sustainable growth in demand and inflation outcomes consistent with the inflation target over time." AUD/USD then plunged 1.3% last Friday.

The pair continues its rebound initiated from the low of 106.77 last Friday. Currently it is striking against the upper Bollinger band, suggesting an acceleration to the upside. Support is provided by the 50-period (30-minute chart) moving average. Meanwhile, the 20-period moving average has just crossed above the 50-period one, and the intraday relative strength index has broken above the overbought level of 70, indicating a continuation of the bullish bias. The immediate resistance at 108.25 is in sight. Above that level, the next resistance would be found at 108.70.