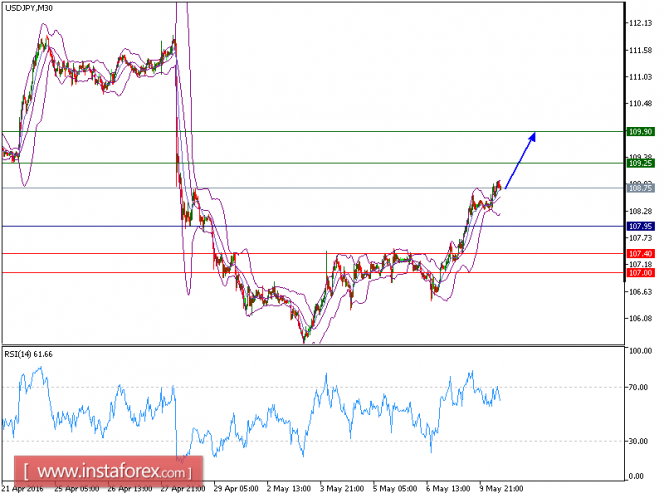 USD/JPY is expected to post further gains. Overnight U.S. stock indexes ended mixed, with the Dow Jones Industrial Average dropping 0.2% to 17705, the S&P 500 adding 0.1% to 2058, and the Nasdaq Composite rising 0.3% to 4750. Energy and materials shares were pressured by weakening commodity prices, while health-care and biotech shares performed the best.

On the forex front, the U.S. dollar kept strengthening against other major currencies. While Japanese Finance Minister Taro Aso said in the parliament that he is prepared to undertake intervention in view of the Japanese yen's recent sharp appreciation, USD/JPY surged 1.1% to 108.31.

The pair is striking against the first upside target at 108.70. It has just broken above the upper Bollinger band, calling for an acceleration to the upside. Technical indicators also suggest a continuation of the intraday bullish bias, with the 20-period moving average stands well above the 50-period one, and the intraday relative strength index being well directed above the neutrality level of 50. Upon recovering the level of 108.70, the pair should proceed further toward 109.25 (last seen on the pair's plunge on April 28).