In March 2015, the EUR/USD bears challenged the monthly demand level of 1.0570 which had been previously reached in August 1997.

Later in April 2015, a strong bullish recovery was observed around the mentioned demand level.

In February, the depicted price levels around 1.1400-1.1500 acted as a significant supply zone during the current bullish pullback. 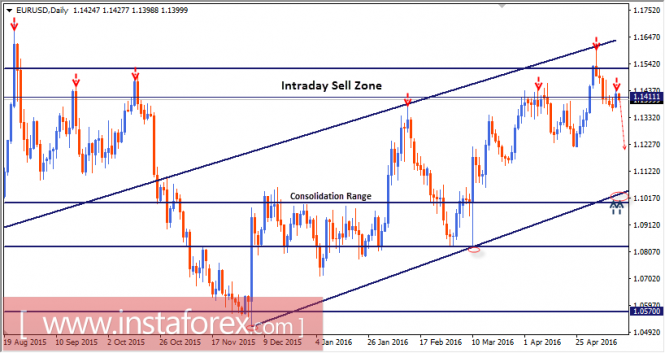 On February 3, a bullish breakout was executed above this consolidation range.

Bullish fixation above 1.1000 was mandatory to allow bullish movement to continue.

Similar to what happened in October 2015, the supply zone of 1.1410-1.1550 should constitute a significant resistance zone for the EUR/USD pair.

Last week, the 1.1600 level corresponded to the backside of the broken uptrend line depicted on the chart where the shooting-star daily candlestick appeared, indicating significant bearish rejection.

On the other hand, a bearish decline towards 1.1000 (depicted uptrend line and previous consolidation range) should be considered as a valid BUY entry.