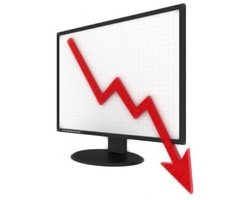 The last Friday's US job market data was unexpectedly disappointing for global investors as the NFP Payrolls revealed the weakest figures in six years. According to the report, the non-farm payrolls advanced by a seasonally adjusted 38,000 for the previous month, strongly below expectations for an acceleration of about 160,000. Moreover, the April figures were revised down to 123,000 only. The only good data from the report came in a form of declined unemployment rate, which went down to 4.7%. In conclusion, the unexpected decline in NFP numbers has significantly decreased the possibility of a rate hike at the Fed meeting in June. According to CME Group FedWatch tool, the implied probability of June interest rate hike is at the level of 3.8% only.

Let's now take a look at the US Dollar index technical picture in the daily time frame after the NFP data was released. A clear sell-off can be seen here after the 100 DMA was hit and a possible higher high had been made. Currently, the market is trading at the support level of 93.80 and despite the recent possible higher high the bears seem to be still in control over this market.