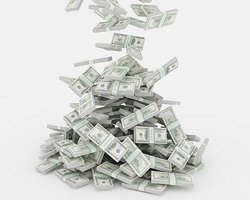 As we had expected, the Dollar index made a pullback through our first target of the 38% retracement and even reached the 50% Fibonacci retracement. The trend is bearish for the short-term.

The bullish channel was broken from last week and we noted promptly that a correction was near and our first target was the 38% Fibonacci retracement. The dollar weakened amid a drop in NFP numbers announced on Friday. This caused a breakdown.