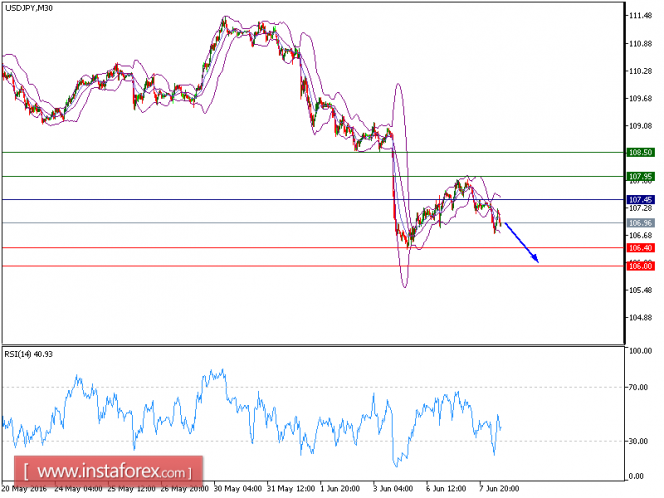 USD/JPY is expected to trade with a bearish bias. On Tuesday, US stock indices were range-bound and mixed at the close. The Dow Jones Industrial Average edged up 0.1% to 17938, the S&P 500 was also up 0.1% to 2112, while the Nasdaq Composite was down 0.1% to 4961. Energy shares continued to be the leaders as oil prices settled above $50 a barrel for the first time since July. Telecoms and transportation shares also performed well, while pharmaceutical, biotech and financial shares were under pressure.

In forex trading, the US dollar weakened broadly against other major currencies. The Australian dollar jumped after the Reserve Bank of Australia, as expected, kept its key interest rate unchanged at 1.75% and gave no indication of further easing. AUD/USD surged 1.2% to 0.7457, breaking above its 200-day moving average.

The Canadian dollar strengthened further against the US dollar as oil prices hit 2016 highs. USD/CAD dropped another 0.6% to a one-month low of 1.2734.

The British pound bounced in Asian trading hours yesterday as two polls on Britain's EU membership referendum showed that the "Remain" camp was taking the lead. GBP/USD once reached 1.4643 and settled 0.7% higher at 1.4542.

Meanwhile, EUR/USD traded in a tight range and closed broadly flat at 1.1356. At the same time, USD/JPY declined 0.2% to 107.33, USD/CHF fell 0.6% to 0.9646 and NZD/USD was up 0.8% to 0.6973. The pair failed to break above the key resistance at 107.95 yesterday and turned out to be under pressure. Currently it is capped by the descending 20-period (30-minute chart) moving average, which stands below the 50-period one. Strong downward momentum is indicated by the relative strength index, which is badly directed below the neutrality level of 50. The first downside target at 106.40 is within reach, and below that the next support would be found at 106.00.