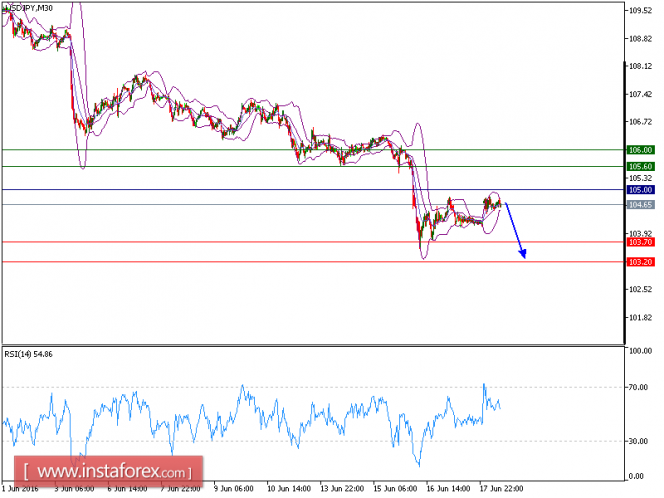 USD/JPY is expected to trade in a lower range . On Friday U.S. stocks closed lower following a rebound in the previous session. The Dow Jones Industrial Average fell 0.3% to 17675, the S&P 500 dropped 0.3% to 2071, and the Nasdaq Composite was down 0.9% to 4800. Health-care and technology shares were the worst performers. Apple Inc (AAPL) lost 2.3% and Google parent Alphabet Inc (GOOGL) slid 2.8%.

As all eyes are on Britain's referendum this Thursday on whether to remain in the European Union, the British pound is making dramatic moves. Following a 1.1% jump to 1.4356 on Friday, GBP/USD opened with a bullish gap and surged 1.8% up to 1.4611 this morning in Asian trading. Traders should be squaring their short positions on the pair ahead of Thursday's big event.

At the same time commodities-linked currencies continued to firm up against the greenback this morning. USD/CAD sank a further 0.4% to 1.2836, AUD/USD added a further 0.6% to 0.7443 and NZD/USD rose 0.6% higher to 0.7094. The pair failed to break above the key resistance at 105.00 last Friday and entered a trading range between 104.00 and 104.40. However the pair bounced as the Asian trading started this morning reaching a high of 104.81. It is currently trading above the 50-period moving average (30-minute chart) while the intraday relative strength index has surged to levels above the neutrality level of 50 calling for a continuation of the bounce.