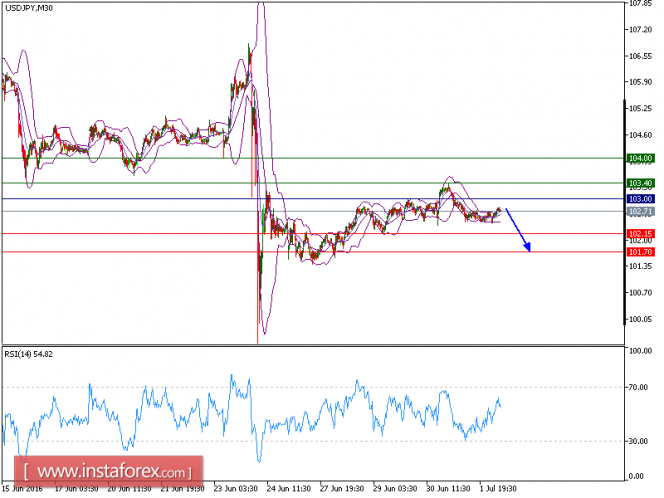 USD/JPY is expected to trade under pressure. On Friday, U.S. stock indices posted the modest gains giving a winning streak of four straight sessions. Trading volume was very light ahead of the long weekend (U.S. markets are closed on Monday, July 4 for the Independence Day). The Dow Jones Industrial Average edged up 0.1% to 17,949 and the Nasdaq Composite was up 0.4% to 4,862. The S&P 500 stepped up 0.2% to 2,102, bringing its four-day advance to 5.1% and posting its best week since November. Automobile, retailing, and pharmaceutical & biotech shares advanced the most.

The European stocks continued to score, with the Stoxx Europe 600 rising 0.7%.

AUD/USD rose 0.6% to 0.7492 on Friday, but came under pressure this morning as the latest federal election in Australia has not resulted in a clear majority for Prime Minister Malcolm Turnbull's Liberal Party-led coalition or the opposition Labor Party.The pair broke below a bullish trend line drawn from June 27 and breached the key support at 102.55 on Friday, turning the intraday outlook bearish. Currently, it remains capped by the descending 50-period (30-minute chart) moving average, while the 20-period moving average stands below the 50-period one. As long as the bearish bias persists, the pair would post choppy price action targeting 102.15 on the downside.