• More mean reversion The rethink of the nonfarm payrolls continued on Monday. Fed fund rate expectations as measured by the futures retraced a little more than half the ground that they lost on Friday as the strength in equities and the possibility of an upward revision to the nonfarm payrolls increased the possibility of a rate hike slightly. Ten-year bond yields, which dropped 4 bps on Friday, rose 6 bps to stand higher than they were before the number came out. (The two years though only regained 2.5 bps of the 6.5 bps that it lost on Friday.) And yet the S+P 500 continued to rise. High yield bonds bounced back as well, indicating more confidence in the economy. Volatility declined across markets, with the VIX index falling below 20 for the first time since late August. 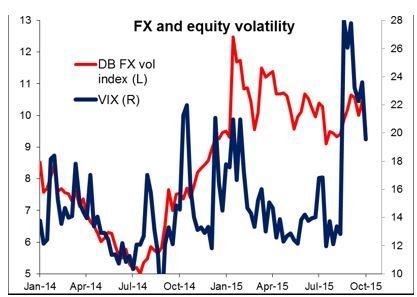 • One reason for the bounce back was a solid number for the employment index of the non-manufacturing ISM index. The overall index was nothing to get excited about as it fell somewhat, but the employment index was strong and so was the employment index (rose to 58.3 from 56.0), which has a good correlation with the final figure for private nonfarm payrolls. That suggests to many people that the revisions to come may change the picture significantly and helped the markets to mean revert.

• With the rebound in confidence, the commodity currencies gained (plus some individual reasons – see below). On the other hand, the safe haven CHF was the weakest currency as people feel less need for a safe haven. USD/CHF is opening almost exactly where it opened on Thursday, when people were looking forward to a good NFP the following day. EUR/USD is once again opening with a 1.11 handle – yesterday it was a 1.12 handle. So despite the NFP shock on Friday, it’s still in the range it’s been in for several weeks now.

• Australia keeps rates steady, as expected The RBA kept rates unchanged, as expected, and maintained its neutral stance. They seemed relatively content with the state of the world, saying that there was some further softening in conditions in China and east Asia of late, but stronger US growth and that Equity market volatility has continued, but the functioning of financial markets generally has not, to date, been impaired. This makes us think that they are unlikely to lower rates in the near future, and indeed the futures are showing only a very small chance of a change over the next year, with the odds of a cut or a hike nearly balanced (17.5% chance of a cut, 15.3% chance of a hike = 67.2% likelihood of no change). This helped AUD to recover today.

• TPP to help NZ milk exports The Trans Pacific Partnership trade deal between the US, Japan and 10 other Pacific Rim countries has been concluded. It will gradually open the Canadian market to foreign milk slightly. This helped NZD this morning.

• Today’s highlights: German factory orders for August unexpectedly fell by 1.8% mom vs an expected rise of +0.5% mom. To make matters worse, the July figure was revised down sharply as well. Orders from the Eurozone rose, but domestic orders fell and orders from outside the Eurozone fell by the most of all. The figures show that Germany is vulnerable to the downturn in global trade just like any other country. Of course the figures are likely to be even worse in the future as a result of the Volkswagen scandal. This is negative for the EUR in that any weakness in Europe’s biggest economy increases the likelihood that the ECB eventually ramps up its QE program.

• From Canada, we get the Ivey PMI for September. Following the decline in the RBC manufacturing PMI last week, we could see a decline in the Ivey figure as well. Coming on top of the low oil prices, CAD could come under renewed selling pressure.

• From the US, we get the trade balance for August.

• As for the speakers, ECB President Mario Draghi and Kansas City Fed President Esther George speak. Draghi is giving a welcome speech at the Art on Site Inauguration, it doesn’t sound like the venue for any major policy initiatives. George is one of the most hawkish people on the FOMC. Her comments are likely to reinforce the idea that the Fed is still on track to hike rates this year, the September nonfarm payrolls notwithstanding. That could firm up the dollar.