•Chinese markets open higher after a week-long break. Chinese stock markets, which have been under heavy selling pressure due to growth concerns and the devaluation of the yuan, rallied a bit after re-opening following the break since the end of September. The Shanghai Composite was up around 3.8%, trying to catch up the recent rally in global equity markets. The positive sentiment could roll into the European markets and keep them elevated.

• Overnight Japan’s current account surplus rose further in August, beating expectations of a moderate decline. On the other hand, machine orders plunged 5.7% mom in August, from -3.7% mom previously, missing expectations a 2.3% rise. This was the third successive drop, adding to the recent weak data coming from the country. The reaction on JPY was limited, as investors remain focus on the much anticipated end of October meeting.

• Today’s highlights: During the European day, the spotlight will be on the Bank of England monetary policy meeting. With no change in policy expected, the number of dissenting votes is likely to be the key point again. The consensus is that the vote will once again be split 8-1 with Ian McCafferty to maintain his call for a rate rise. Market participants will be eager to see if McCafferty is joined by the formerly hawkish Martin Weale or Kristin Forbes, who argued that the underlying inflation should start to pick up soon and monetary policy would need to be tightened sooner. Despite the recent hawkish comments however, market expectations for BoE tightening have been pushed back, with the timing for the first rate hike now slipping from around 9 months in August (meaning the first hike to occur around April) to 15 months in October. This explains a bit the recent weakness seen in GBP. 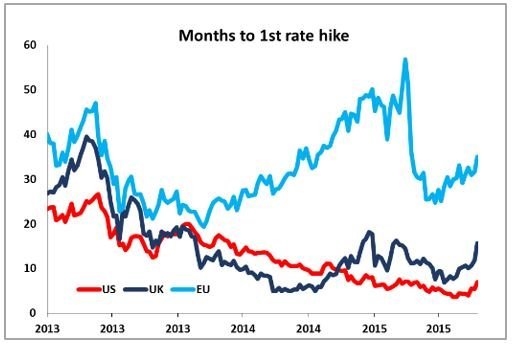 • In addition to the BoE meeting, the Fed releases the minutes of its September FOMC meeting. At this meeting the FOMC remained on hold, as the market had anticipated, but surprised investors by presenting a more dovish outlook than expected. The Committee did discuss the idea of hiking rates at this meeting, but decided not to because of global factors (as opposed to strong domestic factors). Although the market has shifted expectations of a Fed hike out to March 2016, many Fed officials continue to signal their willingness to raise rates before the end of the year. In the minutes released today, we will have the opportunity to see how close the call for a September liftoff was, and if they are likely to start hiking if the global environment calms down. In such case, USD could regain some of its lost momentum.

• As for the indicators, German trade surplus declined more than expected in August. This weakened EUR a bit.

• From Canada, we get the housing starts for September. The forecast is for the figure to decline somewhat, which could prove CAD-negative.

• In the US, initial jobless claims for the week ended Oct. 3 are coming out.