• Fed minutes: September decision was not a close call The minutes of the September FOMC meeting showed that Fed officials remained uneasy with low inflation, which has been below the 2% target for more than three years. In the Summary of Economic Projections, all FOMC participants projected that inflation would be at or close to the Committee’s 2% longer-run objective in 2018. This means that if the Fed sticks to its dual mandate, it will not raise rates this year. Even though several policymakers since the September meeting said that the decision to hike was a close call, the minutes described a committee that wasn’t very inclined to raise rates. Many participants acknowledged that recent global economic and financial developments may have increased the downside risks to economic activity. This signaled that overseas factors are increasingly important in their decision of a lift-off, mirroring the press conference from Fed Chair Yellen. Another point of concern was the strong greenback, which could delay or diminish the expected upturn in inflation. Fed members referred to the strong dollar 25 times in September meeting, compared to around 12 in July.

• The outcome of the minutes favored risk appetite, with US stocks ending higher on Thursday and the dollar staying vulnerable against almost all its peers. Fading expectations of a rate hike are likely to keep USD in a corrective phase, in our view.

• Crude oil surges above USD50 a barrel WTI jumped above USD50 per barrel after comments by OPEC Secretary-General that demand will climb more this year than previously projected amid cheaper fuel price. He also predicted a significant drop in production growth, which could add further upside support to WTI. (see technical below).

• Today’s highlights: From Norway, the CPI for September is coming out. Even though the inflation is close to the Norges bank 2.5% target, low oil prices, soft industrial production and weak manufacturing PMI pushed the Bank to cut its key rate at their September meeting. The Bank has also maintained the likelihood for further cuts. But the recent rally in oil prices strengthened the Norwegian krone and a positive surprise in the inflation figure today, could keep NOK supported. 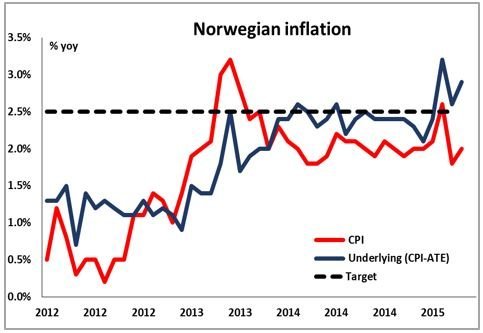 • In the UK, trade balance for August is coming out.

• From Canada, we get the unemployment rate for September. The labor market has continued to add jobs at a moderate pace, with positive momentum in public sector hiring offsetting restructuring in the oil sector. With just more than a week ahead of the October 19 federal election, a strong jobs report could strengthen CAD.

• From the US, wholesale inventories for August are due to be released.